We like being ahead of GDP growth, it’s the first time we’re not in double-digit growth, but at the bottom line, on EBITDA its good. We only guide on EBIT and CAPEX,”  Bob Collymore, Safaricom CEO.

Safaricom Plc (NSE: SCOM) has recorded a 20.2 percent growth in net profit to Ksh 31.5 billion for the six months ended September 30 (2018/2019)  on the back of a strong performance in mobile money M-Pesa and data.

“I’m pleased with the progress we made on a number of fronts in the first half of the year. We achieved solid results driven by strong M-Pesa gains, further diversification of our revenue mix to tap into new growth areas and investment in new revenue streams, which contributed to a double-digit increase in Earnings Per Share (EPS), and free cash flow,” chief executive Bob Collymore said.

“Earnings before interest and taxes (EBIT) recorded a strong 18% y/y while margins increase 3% y/y, supported by revenue growth and cost optimization,” announced Sateesh Kamath. “ We remain confident in meeting our guidance for this year,” Safaricom chief financial officer Sateesh Kamath. This resulted in a 22-percent increase in its earnings per share.

“We like being ahead of GDP growth, it’s the first time we’re not in double-digit growth, but at the bottom line, on EBITDA its good. We only guide on EBIT and CAPEX. We like being ahead of the country’s GDP growth. We are not a company that should be lagging,” said Bob Collymore in an interview with Alykhan Satchu,  CEO Rich Management.

Collymore said this was also attributed to sustained investment in their network, which saw Safaricom invest Ksh17 billion in the first half of the year driven by increased network roll out and acceleration of broadband and fibre deployment. 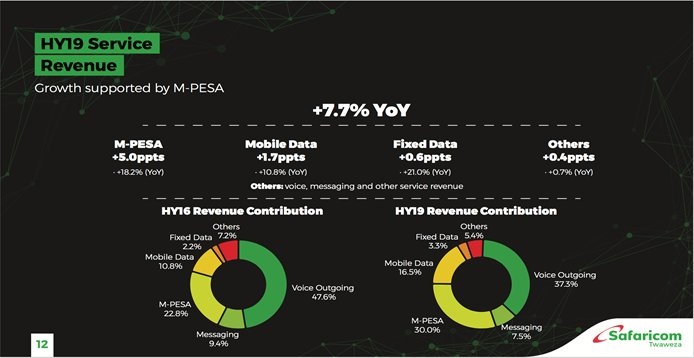 However, Safaricom  noted that “As  consumers grapple with inflation, higher taxes levied on M-PESA, voice, SMS, mobile and fixed data, our business is finding itself forced to maintain an increasingly delicate balance.”

Service revenue grew 7.7% to Ksh 118.21 billion during H1, while net income increased by 20.2% to Ksh 31.5 billion, supported by the consumption of relevant products and services by our 29.94 million customers.

M-PESA was the main driver of growth for the period, accounting for nearly two-thirds of the 7.7% point increase, and growing 18.2% YoY. M-PESA now accounts for 30.0% of service revenue, ‘indicating the resilience in our business model vis a vis a traditional telco’ noted Sateesh.

Fixed data contributed to 3.3% of Service Revenue and recorded growth of 21.0% for the period.

Collymore said the plan for M-PESA is to be a platform where multiple players can use “But differentiated on the product offering.”