Safaricom’s contribution to the Kenyan economy in the year ended March 2018 grew by KSh57 billion to KSh543 billion equivalent to 6.5 percent of GDP.

“The following “True Earnings” bridge shows that the total value we created for Kenyan society in FY18 was KES 543 billion, 12 percent greater than in FY17 and around 9.8 times greater than the financial profit the company made in the same year,” according to the telco’s 7th Sustainable Business Report themed “Creating Shared Value”.

“When monetised, the net value of the most material social, environmental and economic impacts of the company, both positive and negative, gives an indication of the total value that Safaricom creates for the people of Kenya,”  says Safaricom in the report prepared by consultancy firm KPMG. 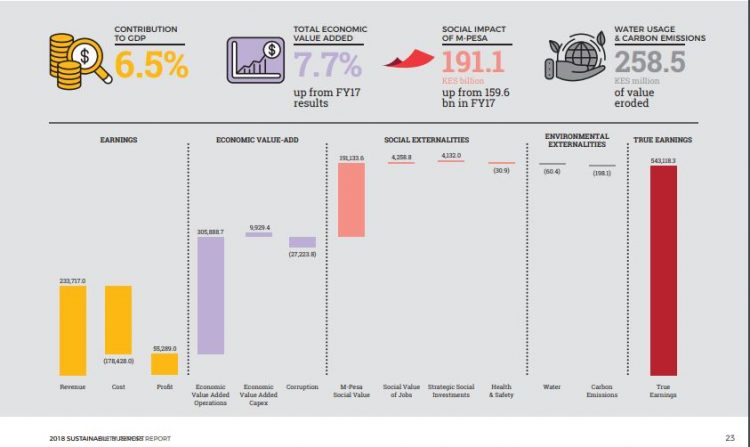 “Some of the areas in which we have recorded progress include Good Health And Wellbeing (SDG 3), Quality Education (SDG 4), Decent Work And Economic Growth (SDG 8), and Industry, Infrastructure And Innovation (SDG 9),” says Bob Collymore, Safaricom CEO.

However, “While our performance in these areas is reason for celebration, it is unfortunate that these gains are somewhat overshadowed by the increase in our carbon footprint. We are cognizant of the very real threats posed by climate change, and have committed to becoming a ‘net zero’ carbon-emitting company by the year 2050.”

Additionally, the social impact of M-PESA increased by 20% to KES191.1 billion up from KES159.6 billion in FY17. According to the report, the major drivers for this growth have been the increase in customer, agent and merchant numbers.

A rise in the average number of transactions per customer, as well as the increased value paid to M-SHWARI users in interest also contributed to the growth.

“The greatest value continues to be felt by M-PESA customers who benefit from improved ability to manage and save money, as well as the wellbeing that comes with access to goods, services and opportunities that would not previously have been available to them.” Nicholas Ng’ang’a, Chairman, Safaricom PLC Board.