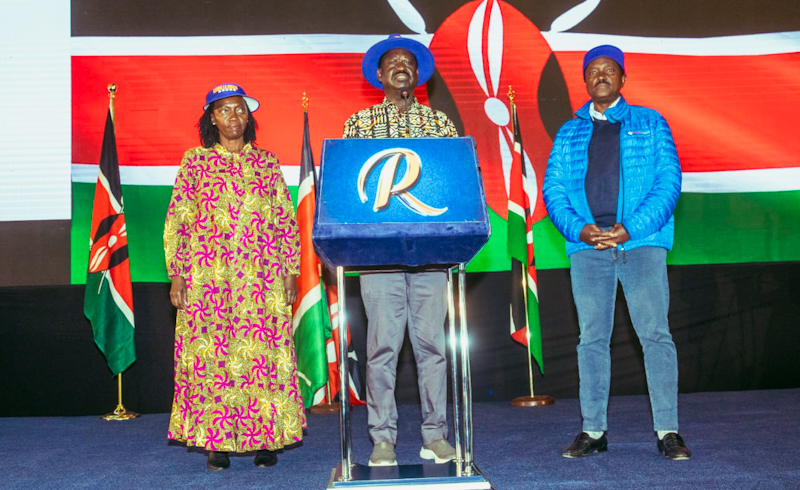 The Raila Odinga-led coalition said it is pursuing all available constitutional options.

The other contestants in the race, George Wajackoyah of Roots Party and David Mwaure of Agano Party, got 61,969 and 31,987 votes, respectively.

“We are pursuing constitutional and lawful channels and processes to invalidate Mr Chebukati’s illegal and unconstitutional pronouncement. We are certain that justice will prevail,” Raila Odinga said Tuesday.

The figures announced by Mr. Chebukati are null and void and must be quashed by a court of law. In our view, there is neither a legally and validly declared winner nor a President-Elect.

Subsequently, four commissioners of the IEBC, led by the vice chair Juliana Cherera, commissioners Francis Wanderi, Irene Masit and Justus Nyang’aya,  Tuesday disclosed that the aggregation of the percentages of the results were a mathematical absurdity that defy logic.

“This summation gives us a total of 100.01 per cent. This translates to approximately 142,000 votes which will make a significant difference in the final results,” Cherera said.

“When we demanded that we verify the results, the chairman refused and insisted on declaring and announcing the results,” she added.

“Unless demonstrated otherwise, we all know that the percentage represents a fraction of a whole number. For instance, the 7.17 million valid votes cast in favour of the winning candidate translated to 50.49 per cent, then it was 50.49 of what?” Cherera asked.

The IEBC Chairman Wafula Chebukati, in a notice dated August 16,  gazetted William Ruto as President-elect and Rigathi Gachagua as the Deputy President-elect.

“In exercise of the powers conferred by Articles 88 (4), 136, 138 (4) and (10) and 148 (3) of the Constitution of Kenya, section 4 of the Independent Electoral and Boundaries Commission Act, 2011, section 39 (1), (1C) and (1H) of the Elections Act, 2011, Regulation 87 (3) and (8) of the Elections (General) Regulations, 2012, the Chairperson of the Independent Electoral and Boundaries Commission declares that: (a) In respect to Article 136 (1) of the Constitution: Ruto William Samoei (b) and in respect to 148 (3) of the Constitution: Gachagua Rigathi, have been duly elected as the President and Deputy President, respectively, of the Republic of Kenya having complied with the provisions of Article 138 (4) of the Constitution, during the General Election held on Tuesday, 9th August 2022,” Mr Chebukati said.

Kenya’s Supreme Court is mandated by Article 163 of the Constitution to hear and determine disputes relating to the election of the President.

Therefore, the Azimio coalition has 7 days to file their petition after the date of the declaration of the results of the presidential election.

The seven-day timeline is provided in the Constitution and Supreme Court Presidential Election Petition Rules published in 2017.

The petitioners will have 24 hours to serve the parties in the case.

“Within 6 hours of petitioning, the petitioner ought to serve the respondents in the case with the petition through electronic means, nationwide circulation of newspapers or serving it directly to the respondents,” Judiciary’s statement read in part.

“The President of the Supreme Court further directed that upon parties being served, they will have 4 days to file their responses.  They may be accompanied by replying affidavits sworn by the respondents and any witnesses, setting out the substance of the evidence relied on,” the notice added.

The Supreme Court will then have 14 days to hear and determine the petition. The court’s decision on whether to uphold or nullify the election would be final.

The Real Housewives Franchise Expands in Nairobi and Pretoria