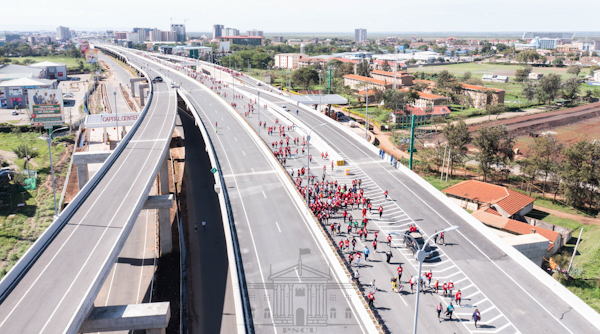 A section of the Nairobi Expressways during the l Nairobi City Marathon. PHOTO May 8, 2022

The Nairobi Expressway will be closed effective Saturday, July 30, 2022, from 9 pm. It will resume operations once it is officially launched.

Moja Expressway company, which manages the road, said the move follows the end of the trial period under which it was serving motorists.

“The trial period for the Nairobi Expressway, which commenced on May 14, 2022, has come to an end,” Moja Expressway Company said in a statement.

“The road will now be officially closed from 9 pm this Saturday, July 30, 2022, until it is officially commissioned.”

NOTICE: CLOSURE OF THE NAIROBI EXPRESSWAY
The Nairobi Expressway will remain closed on Saturday, 30th July 2022 from 9 pm. Sincere apologies for the inconvenience caused. pic.twitter.com/9o2ePcDUDk

The Nairobi Expressway has 11 tolling stations, 54 toll plazas, 54 cameras along the 27km expressway, with 126 cameras inside the toll plazas.

The expressway, with 18.2km on the ground and 8.9km elevated, is a class A, four-lane dual carriageway with a design speed of 80km per hour.