Kenya’s Monetary Policy Committee (MPC) is expected to retain its benchmark interest rate at 9.0 percent at its meeting Tuesday.

Most financial analysts are in consensus that the regulator needs to ‘hold’ as it takes a wait-and-see approach.
According to them, inflation is expected to tick up moderately with the enactment of the Finance Bill 2018 and uncertainty on the currency persists despite its resilience.
They also state a stable macroeconomic environment. 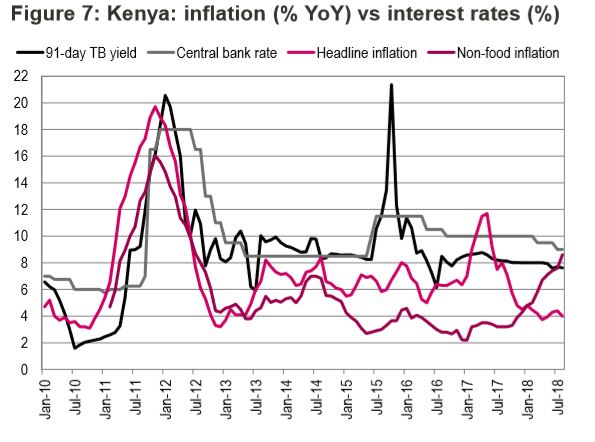 “We no longer expect a rate cut, from 9.0 percent, in September because of upside risk to inflation,” said Yvonne Mhango, Renaissance Capital, Sub-Saharan Economist.
Genghis Capital analysts state a “Possible pressure on the currency, coupled with increased inflation expectations pose a degree of uncertainty, while the private sector credit growth is expected to remain low. Tighter fiscal stance from the recently debated Finance Bill 2018: Reduced government spending in FY18/19, coupled with the higher taxes is likely to stifle growth rate in 2018 and thus exacerbate the output gap in the economy.”
The main question is whether the Central Bank will offer some respite from the pain of fiscal consolidation.
CBA Analysts, Faith Atiti and Stephanie Kimani say, “While the conduct of monetary policy may be complicated by the current uncertainty on the fiscal side, the current low level of inflation at 4.04 percent, relative currency stability and potential for sustained negative output gap with the afore-mentioned austerity could be ground for further accommodation.”
They add “Even then, the bigger challenge for the monetary authority remains the current inefficiencies in the transmission of policy signals.”
“That said, an appropriate monetary policy response could soften the potential loss of output due to the current fiscal stance.  Therefore, with the benefit of low inflation and a fairly stable exchange rate, a loose monetary policy stance may help narrow the potential productivity from expected tighter fiscal conditions,” they add.
For Cytonn Investments, “With this, coupled with expectations of inflation remaining within the government set a target of 2.5 percent-7.5 percent during the year despite inflationary pressures in H2’2018, we expect the MPC to retain the CBR at 9.0 percent which will also effectively maintain the current low lending rates to the government.”
The committee last met on July 30th 2018 and cut the CBR by 50bps to 9.0 percent, citing room for more accommodative monetary policy, on the back of a stable macroeconomic environment.