“We all must understand that saving our planet, lifting people out of poverty, and advancing economic growth are one and the same fight. We must connect the dots between climate change, water scarcity, energy shortages, global health, food security, and women’s empowerment. Solutions to one problem must be solutions for all,” said Ban Ki-moon former Secretary-General of the United Nations in 2011.
The former Secretary-General further reiterates what most nations are currently facing that, “The global economy is generating pressures as well: rising joblessness, widening social inequalities, and the emergence of new economic powers.”
The Food and Agriculture Organisation (FAO) says, at the level of individuals, people living on less than US$1.25 a day may need to skip a meal when food prices rise. Farmers are hurt too because they badly need to know the price their crops are going to fetch at harvest time, months away. If high prices are likely they plant more. If low prices are forecast they plant less and cut costs.
The developing world’s poor are experiencing the effects of higher commodity prices, and declining agricultural productivity growth is exacerbating the problem.
In Kenya, people depend on agriculture not just for raw materials but also for their food supply. Food is necessary to satisfy hunger and to provide the necessary nutrients for healthy growth.
However, with the inflation rate estimated at 11.48 percent year-on-year in April of 2017, compared to a 10.28 percent rise in the previous month. The inflation rate remained the highest since May of 2012 mainly driven by a rise in food prices as the country struggles with drought. Inflation, according to the Kenya National Bureau of Statistics (KNBS) data.

Analysts disclose that food prices are likely to remain volatile.
“The rate of inflation is expected to be on the rise this year, driven by high food prices due to the ongoing drought, which according to the Meteorological Department (KMD) department will persist, as it projects below average rainfall in the March-May season, and high fuel prices following the revisions by the Energy Regulatory Commission (ERC),” according to CytonnInvestments.
“The food situation in the country has deteriorated and this has had a massive impact on inflation, as the food component of the Consumer Price Index (CPI), which carries a weighting of 36.0% has been on a gradual increase over the past three months, clocking month on month changes of 1.2%, 1.3% and 1.7% in November, December and January 2017, respectively,” The add.

Kenya’s peasants are migrating to the cities in huge numbers because it is becoming increasingly difficult to survive on their farms.
Why? In Kenya, farm inputs – fertilizer, quality seeds and the input placed in the cultivation of crops is more than what is received from the yield. The farmers get a raw deal in selling their produce.
Farmers are trapped using inefficient technologies; average cereal yields have barely increased in 40 years and farm sizes are shrinking. Although Kenyan farmers are leaving the farm, far too few are finding productive jobs in the cities. Most are getting poorer, the cost of safety-net programmes is escalating and Kenya’s dependence on concessionary food imports is growing.
Cytonn is of the view that the country is still at manageable levels when it comes to import dependency.
“Kenya’s dependency on imported food has improved over the last five years, with the import dependency ratio on food products, vegetable products and animal products having declined by 0.8% points, 0.9% points and 0.3% points, to 28.3%, 31.7% and 0.8%, from 29.1%, 32.6% and 1.1%, respectively. The country’s ability to cater for its food needs without external assistance has also improved over the last five years, with the country’s self-sufficiency ratio on food products, vegetable products, and animal products have risen by 0.6% points, 0.6% points and 0.1% points, to 75.2%, 72.1% and 100.0%, from 74.6%, 71.5% and 99.9%, respectively.”
At the continental level, Africa has a huge import bill that can be overcome if we doubled the production of maize, but we are still‘talking about food security’.
“The Current import bill is at 35 billion dollars and it is estimated to be at 110 billion dollars by 2025,” Dr. Agnes Kalibata, President, Alliance for a Green Revolution in Africa (AGRA).
As the recent world food crisis has demonstrated, these trends can have catastrophic consequences for the continent’s poor.
In an annual report produced by the Rome-based U.N. Food and Agriculture Organization, the World Food Program and the U.N.’s International Fund for Agriculture Development  on the state of food insecurity around the world, the U.N.’s three food agencies urged governments to make good on pledges to share information about farm forecasts and food stock levels to avoid the price swings that resulted in food riots in 2006-2008 and an eight percent increase in the number of undernourished people in Africa.
“Changes in income due to price swings that lead to decreased food consumption can reduce children’s intake of key nutrient during the first 1000 days of life from conception, leading to a permanent reduction of their future earning capacity and an increased likelihood of future poverty with negative effects on entire economies,” the report said.
A question that begs for an answer is, should the government keep on banking the projections from the Meteorological department?
Long-term measures are required to secure Kenya’s food, energy, and fuel supply through the establishment of strategic national reserves.
This is not enough if no sound policies are formulated and implemented.
“We need long-term solutions to alleviate the adverse impacts of climate change and unpredictable weather patterns.
We must build the resilience of communities and invest in agriculture and rural infrastructure,” according to Siddharth Chatterjee, the United Nations Resident Coordinator and the UNDP Resident Representative in Kenya in an op-ed in the Huffing post.
“Piecemeal responses to climate-related emergencies can no longer suffice. We need sustainable solutions to effectively tackle drought and its devastating impacts on Kenya’s most vulnerable communities,” He adds.
Kenya must continue to build political institutions that generate dynamic stability. Internal security must be guaranteed to enable a stable civil environment that upholds the security of persons, property, access to and equality before the law. Governments must build social cohesion, eliminate conflict and ease the paths to self-betterment for its citizens through equitable access to resources, services, and opportunities that will improve earnings, consumer purchasing power, savings, and investments.
Kenya must renew its efforts in fully investing into the agricultural sector through enough budgetary allocation.
Meager resources allocated to the sector has led to the appalling state of rural infrastructure in many rural towns, it has not fully exploited its irrigation a reason why Kenyan farmers rely almost exclusively on rain-fed farming and face exceptionally high transport and marketing costs that makes a shift to more efficient farming unprofitable.
The government also need to invest heavily in agricultural research, irrigation, rural roads, and power. They also need to provide direct policy support to their farmers by shoring up farm credit systems, subsidizing vital inputs like fertilizer, power, and water, and intervening in markets to ensure that farmers received adequate and stable prices. 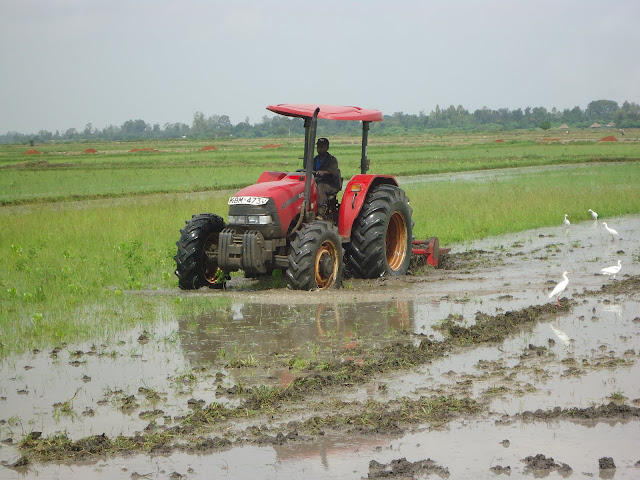 This in return FAO says “Investment in infrastructure, marketing systems, extension and communication services, education, as well as in research and development, can increase food supply and improve the functioning of local agricultural markets, resulting in less volatile prices.”
More importantly, increasing revenues for the agricultural sector and rural economies could attract investments in infrastructure and human services.
FAO report proposes for “more information and better information” to allow transparency in trade on future markets.
“This would help ensure that governments and traders make informed decisions and avoid panic or irrational reactions,” and it also reiterates the importance of safety nets in cushioning the vulnerable. At the country level, governments can protect themselves from food price increases through a variety of financial arrangements such as call options, which would give them the right to buy food at a set price even months ahead, regardless of how the market has moved in the meantime.”

Climate Change to Impact More Than 200 million People by 2050: Report

Our Language is Flirty

Find us on Social Media