South Sudan: A Nation Rewriting its History, Curving a New Path for its People

February, southern Sudan voted overwhelmingly in favor of independence from Sudan, with 99 percent of the population opting to split Africa’s biggest country in two. This was the cry, hopes and aspiration of a nation to entangle itself from chains of oppression.

US President Barrak Obama had said: “Not every generation is given the chance to turn the page on the past and write a new chapter in history. Yet today – after 50 years of civil wars that have killed two million people and turned millions more into refugees – this is the opportunity before the people of southern Sudan.”

This Saturday the Republic of South Sudan will be born, and this will raise a number of practical issues for the country. Change they have been longing for the last 10 years since the Comprehensive Peace Agreement of 2005, that brought a 17-year stretch of war to a close.

This is what was termed as “A successful vote (that) will be cause for celebration and an inspiring step forward in Africa’s long journey toward democracy and justice. Still, lasting peace in Sudan will demand far more than a credible referendum.”

An assurance to the two leaders that the world was behind them in the new chapter they were turning, 15 African Heads of State witnessed what ended decades of conflict, which claimed more than two million lives.

The SPLA/M joined the opposition front -National Democratic Alliance in 1989 & signed a comprehensive peace treaty with the Sudan govt in 2005.

Under the agreement, a referendum on independence will be held in the south in January 2011. The SPLM leadership recently endorsed independence for the South, while prior to the peace process it been committed to a united, democratic, federal Sudan.

SPLM leader John Garang died when a Ugandan military helicopter he was in crashed on July 30, 2005 — less than a month after he had become Sudan’s vice-president under the Naivasha Agreement.

South Sudan has large oil reserves & mineral deposits. Though landlocked it has access to the Nile river waters. It also has much livestock.

In Sudan, we are presented with a far less speculative position. Sudan may shock us. It may sadden us.

“The first thing we must do, clearly, is to succeed. We must succeed to strengthen and further entrench democracy in our country and inculcate a culture of human rights among all our people, which is, indeed, happening,” says Thabo Mbeki, former president of South Africa. 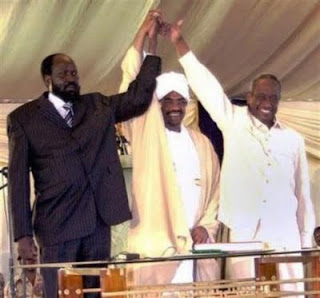 The South also has its challenges that will not go away with a break from Sudan as we know it, and it will also need its leadership to redouble their efforts to foster a national identity that accommodates its own rich diversity and overcomes the historical tribal and political fault lines that were exacerbated by the two civil wars in its modern history.

The young government faces the massive challenges of reforming its bloated and often predatory army, diversifying its solely oil-based economy, and deciding how political power will be distributed among the dozens of ethnic and military factions.

The government must also begin delivering basic services like education, health services, and water and electricity to its more than 8 million citizens.

“We must succeed to rebuild and reconstruct our economies, achieve high and sustained rates of growth, reduce unemployment, and provide a better life for the people, a path on which we have embarked,” Thabo Mbeki, former president of South Africa.

The realities of the problems that face the country, issues such as oil revenues, debt, border demarcation, security and the status of Abyei, Southern Kordofan and Blue Nile states, have solutions and or can be improved for prosperity, employment health, lifestyle, and very friendly environment. Investing our energy to reach a point where they can all listen and concentrate on achieving common goals as South Sudan.

How Do We Ensure Food Security in Kenya?

Celebrating the pillar of our society- women