Journalists With Disability Can Eliminate Social Barriers in Newsrooms 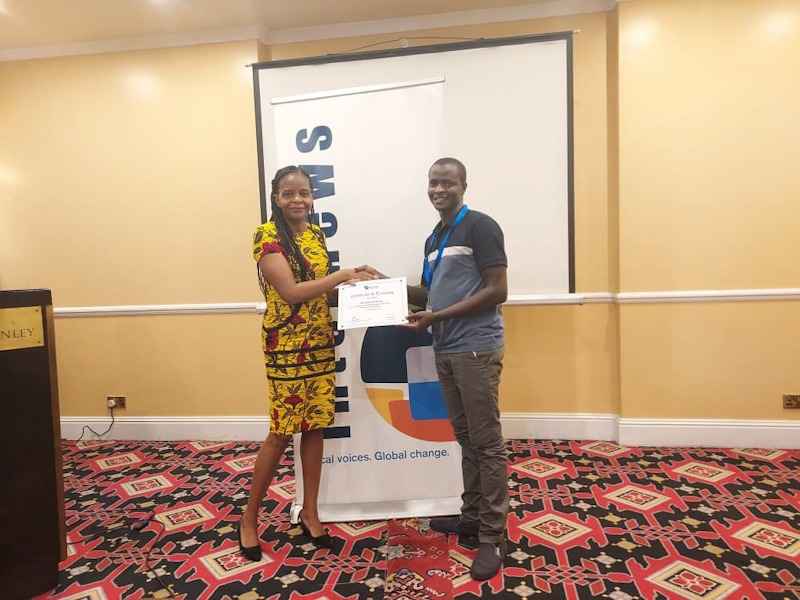 Typically, I would need the assistance of a sign language interpreter when interviewing a Deaf person to facilitate communication between us.

Today, however, I am fortunate to have a conversation without an interpreter while talking to George Ochola, 26, a student at Nairobi Aviation College studying Film Production and Camera Operations.

“I am Deaf but hard of hearing. I can speak, but I can’t hear well, so I’m using a device known as a hearing aid that is helping me to produce the sound,” he says.

According to his parents, George’s hearing problem began when he was four. There was little awareness about the Deaf at the time, and his parents tried treating him with herbal medicines before taking him to Kenyatta National Hospital (KNH), where his doctor recommended the type of hearing aid he could use.

“Today, when you talk, I can hear you clearly because of this, my hearing aid. Other hearing aids are not as audible, and you still struggle to make out what someone is saying,” he narrates.

When George first began treatment at KNH, his parents would accompany him to his monthly appointments. That has now reduced to three hospital visits per year with his doctor. He says that the treatment has been costly for him. For example, he spends approximately Sh. 25 000 per visit at KNH.

“If I go for a check-up today and the doctor tells me that my ear has a problem and I will have to go for an operation the following week, then even my NHIF is not enough,” he says of the costly treatment and surgery sessions.

Aside from the costly hospital sessions, George says that using hearing aids is also expensive. He continues to spend money on it because it allows him to communicate with people who do not understand sign language without an interpreter.

“I use a small battery which costs Sh. 900, and it takes only a month before I buy another one. So yearly, I spend around eighty-four thousand for my ear, and when I am not using my hearing aid, my parents get worried, so even my grandmother would sacrifice that money because of communication,” he says.

George is the current Program Assistant at Kenya National Association of the Deaf (KNAD), an organization that lobbies and advocates for the Deaf and hard of hearing. He runs media-related programs where he earns a salary that he uses part of to pay his college fees.

“KNAD has lobbied and advocated that the Deaf should not be seen as different people because we, the Deaf, can do everything that those who are not Deaf do. This has ensured that the Deaf feel comfortable in the environment countrywide,” he says.

George says that awareness of Deaf people and their societies is critical. He says this helps make communication easy without violating the rights of a Deaf person out of ignorance because a Deaf person does not hear no matter how loud one shouts at them.

“I can see your mouth when you speak but not shout. When you shout, you can think that I’m not someone, but when we sit facing each other, I can lip-read and trust me, we can make a deal,” George says of the speech therapy lessons as one of the best ways to communicate with the Deaf.

George, a final-year student, hopes to practice his journalism career more professionally by focusing on his abilities rather than disabilities by playing his watchdog roles in society.

Earlier this year, George was nominated in cohort 43, Disability Chapter at the Young African Leaders Initiative (YALI) Regional Leadership Centre, based at Kenyatta University and supported by the United States.

He remains optimistic that the new year will grant him opportunities to help him deliver part of his roles at KNAD, which involves improving society regarding disability reporting. For instance, he is looking forward to being accepted into the Mandela Fellowship in 2023.

Speaking to journalists during training on disability reporting, Jackie Lidubwi, the Inclusive Media project Lead at Internews, said that such a negative attitude which stigmatizes and discriminates against People with Disabilities needs to change.

“If we have more Journalists with Disabilities in the newsroom, then we are changing the narrative of Disability. We need to have all content we produce accessible to Persons with Disabilities by including sign language interpreters in all programs, not only during news, national events and emergency announcements,” Jackie said, noting that Disability is a human rights issue.

The National Council for Persons with Disability, a state agency mandated to promote the rights of Persons with Disabilities in the country, is carrying out a sign language training program in partnership with the Kenya Institute of Special Education for government officers, particularly those who are at the customer care desks.

Harun Hassan, Executive Director of the National Council for Persons with Disabilities, says that sign language is a national language and training officers in government offices where many people visit – frequently like hospitals and police stations – is one way of removing communication barriers denying the Deaf from accessing services from government facilities.

“It is not about our impairment. It is about barriers that present many of us with different impairments. If the barriers are addressed, there is no disability,” Harun says.

“The constitution of Kenya puts the rights of Persons with Disability at the centre. Whether it is a political, economic, or social right, all rights are in the Bill of Rights, which can only be amended through a referendum, among other rights that we enjoy with other Kenyans.”

Have You Ever Dreamed of Owning a Home? Try These 4 Tips