The growth in Kenya’s real Gross Domestic Product (GDP) in 2020 contracted to -3 per cent as compared to the growth rate of 5.0 per cent in 2019 the statistics body said Thursday.

“The economy was supported by accelerated growth in agricultural production, construction and health services,” the Kenya National Bureau of Statistics (KNBS) said in its 2021 Economic Survey Report.

“In 2021 there are two main factors that affected the production of the report… Covid-19 and late submission of data at some stages. Revision of national accounts was the second reason for the late release,” said Treasury CS Ukur Yatani.

“The revision process entailed taking stock of the available data and assessing their suitability; formulation of a data collection strategy to fill the gaps; conducting various surveys and censuses; analysing and validating the data; compilation of revised and rebased estimates and a consultative review of the revised estimates,” said Yatani when he unveiled the Economic Survey 2021.

“The revised and rebased national accounts has resulted in an increase in the size of GDP, increase in per-capita income, change in the production structure and revised GDP growth rates among other changes,” said Kenya National Bureau of Statistics (KNBS) Director-General Macdonald Obudho. 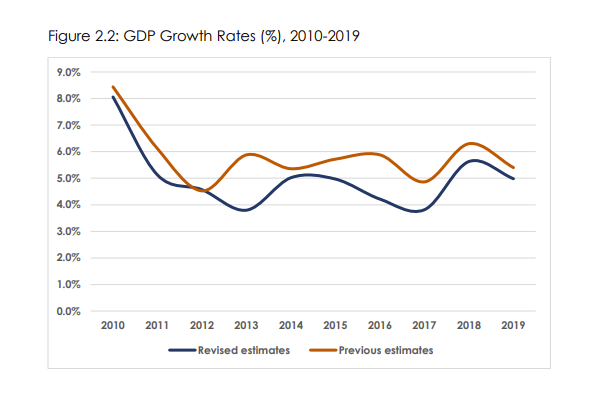 The new data contains the 2017 Census of Industrial Production, the 2017 Integrated Survey of Services, the 2015/16 Kenya Integrated Household Survey, the 2019 Kenya Population and Housing Census and the 2016 Micro, Small and Medium Enterprises Survey.

On the other hand, the accommodation and food services category shrunk by almost 48 per cent.

Charles Robertson, Global Chief Economist, Head of Macro Strategy Unit, Renaissance Capital in a commentary via his Tweet feed says, “With the new data, Kenya’s GDP in 2020 is estimated at $102 billion, the 6th largest economy in Africa (and still bigger than Ethiopia). It represents about 4 per cent of all of Africa’s GDP last year.”

“With Kenya rebasing its GDP, Renaissance capital expected an upward revision, but not as big as the 25 per cent, that we saw in 2014 because a sizeable share of the informal economy was incorporated then. Plus, as the economy gets bigger, the percentage upside is likely to get smaller”- Yvonne Mhango, Acting Head of Research Africa, Africa Economist, Renaissance Capital said on Wednesday.

Economy vs Need for Health as Kenya Ease Containment Measures

Kenya Economy Picked Up in Third Quarter at 9.9%

Kenya Growth Rate Drops to 5.6 per cent in First Quarter