Kenya’s economy generated a total 846,300 new jobs in 2019 according to the Economic Survey 2020 but marked a slowdown in the creation of formal jobs.

The Kenya National Bureau of Statistics found that jobs created in the modern sector decelerated to 2.4 percent from 2.8 percent, an equivalent 67,800 jobs.

Jobs created in the public topped 2.6 percent while those in the private sector grew by a lesser 2.3 percent.

“During the period under review, the total number of self-employed and unpaid family workers within the modern sector was estimated to have increased from 152.2 thousand in 2018 to 162.7 thousand in 2019.” 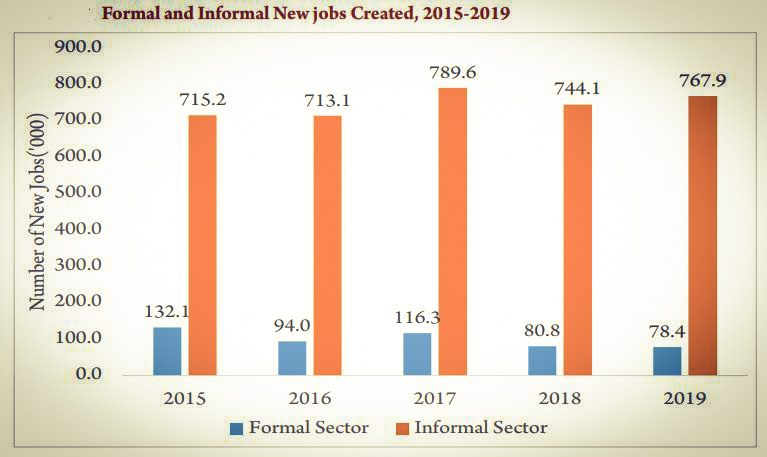 Employment in the private sector flat

The statistics body also found out that the share of the private sector employment remained at 70.5 per cent as recorded in 2018.

Leading industries include agriculture, forestry and fishing; and wholesale and retail trade and repair of motor vehicles, accounting for 15.9, 14.4 and 13.0 per cent of the total private sector employment, respectively.

“There was, however, a suppressed growth in agriculture, forestry and fishing industries at 0.8 per cent in 2019 compared to 1.6 per cent realized in 2018.”

Employment in human health and social work activities recorded the highest growth at 6.1 per cent in 2019.

On the other hand, employment in the public sector registered a 2.6 per cent growth compared to an increase of 1.2 per cent recorded in 2018.

Leading activities that contributed to the increase in employment levels in the public sector were Education; and Public administration and defense; compulsory social security, which accounted for 42.7 per cent and 35.2 per cent, respectively.

Human health and social work activities recorded the highest growth (6.4 per cent) in employment. This was followed by Arts, entertainment and recreation; and Education activities, which grew by 4.5 per cent and 4.0 per cent, respectively, in 2019.

Why Kenyans are Taking up ‘Side Hustle’ to Earn More

Kenyan Doctor, Nyachira Muthiga Honored by Kotex 2020 ‘She Can’ Campaign