In a statement, the Board said the duo will be investigated on allegations of gross misconduct and possible offences in their capacity as senior executives and employees of the company’

In the interim, the Board has appointed Mr Alec Graham as Chief Operating Officer to ensure the continued management of the company.

Alec has over 25 years of experience in the advertising and communications business working with various companies in the WPP plc group.

“In due course, the Board will consider the appointment of an interim chief financial officer of the company.”

Its current share price is Ksh 5.94.  It began the year with a share price of Ksh 6.00  but has since lost 1% off that price valuation, ranking it 34th on the NSE in terms of year-to-date performance. Shareholders’ worries are further compounded by the fact that SCAN has lost 6.31% of the stock’s value from January 21 to date. 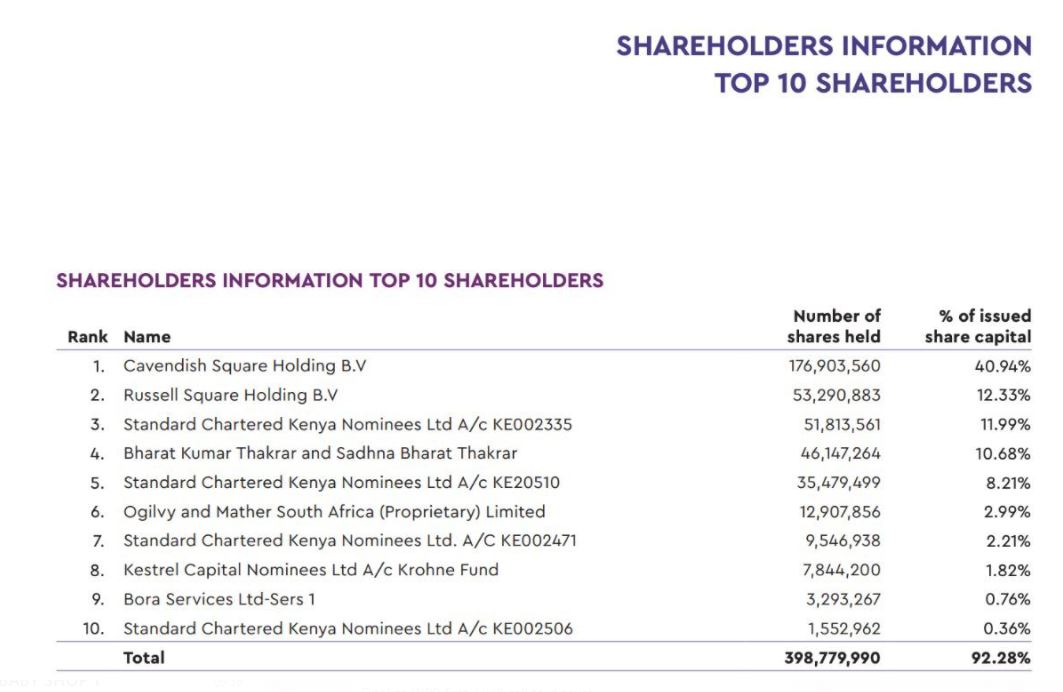 92 per cent of WPP Scangroup is owned by 10 shareholders.

British firm Cavendish Square Holding is the largest shareholder with a 40.94 per cent stake, equivalent to 176,903,560 shares.

Cavendish sister company which is registered in Netherlands, Russell Square Holdings, holds a 12.33 per cent stake (53,290,883 shares) which was acquired in 2018.

Together, the two companies own a 53.27 stake, enough to make any decision for the company. The two came in as the WPP group, acquiring the majority stake causing Scangroup to rebrand to WPP Scangroup.

Thakrar is the biggest individual shareholder with a 10.6 per cent stake, which has with time reduced from 28.53 per cent. His ownership now has a market-to-market value of about Ksh250 million.

Shareholders have been advised to exercise caution when dealing with the company’s securities.

Investing in Government Securities, What You Need to Know

Over Two-thirds of Kenyans Willing to be Vaccinated, Says Survey