Kenya has committed to achieving universal health coverage (UHC) by 2030, as part of the United Nations Sustainable Development Goals (SDGs) however, its realization remains a challenge in delivering equitable access and affordable medicines within its public health facilities.

This is according to the latest  Universal Health Coverage citizenry perception survey conducted by Infotrack, a Research and Consulting company, that found out that  40 percent of Kenyans rate the provision of healthcare services by the national and county governments as poor by 40% compared to 28 percent who rated it as good.

In the findings, only four in ten Kenyans (43%) expressed their satisfaction with healthcare services received from public healthcare facilities. 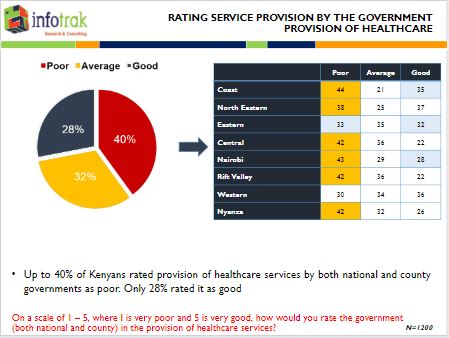 In Kenya, the Universal Health Coverage (UHC) pilot program has been rolled out in four counties: Isiolo, Kisumu, Nyeri and Machakos, but “A majority (69%) of Kenyans are not aware of UHC. Only 31% reported being aware of the UHC program.  Awareness of UHC is highest in regions with a UHC pilot county,” said Infotrak director Angela Ambitho on Monday when releasing the findings.

The Survey was sponsored by People’s Health Movement-Kenya (PHM-Kenya) and conducted between 10th  – 14th September 2019. A representative sample of 1200 respondents was interviewed in 24 counties.  A sample of 1056 interviews was also conducted in the 4 UHC pilot counties.

The report by the research and consulting firm shows the majority of Kenyans 43 percent have not received any healthcare services from public facilities in the last one year. Reasons cited include poor medical services in public health facilities, inadequate facilities, financial constraints among the top.

“With UHC being ushered in as a nationwide program, it is imperative for the Government to give access to quality… affordable but quality in care services. So there needs to be a keen looker from the policymakers on what needs to be improved,” Said Ms. Ambitho.

PHM-Kenya believes that there can never be a better foundation for meaningful universal health coverage than investing in a robust, responsive, quality and accessible primary health care that meets and interacts with individuals, households and communities at their closest point of need, and embraces the full range of healthcare interventions from promotion to prevention, treatment to rehabilitative as well as palliative care.

In terms of financing, cost was identified as the primary reason for up to 85% of Kenyans like UHC. However, beneficiaries in the UHC pilot counties are not aware that while the pilot is ‘free,’ the nationwide rollout will not be free.  “There is ambiguity on the cost and financing of UHC and particularly whether UHC will be free (tax-based) based on need, and will continue to be free post-pilot, or whether it will be subscription (insurance) based, access determined by one’s capacity to pay,” said Collins Liko, Haki Jamii.

On the other hand, The Universal Health Coverage Global Monitoring Report 2019 by the World Health Organisation also finds that the majority of household out-of-pocket health spending is related to medicines and outpatient care, and not necessarily to huge hospital bills.

According to WHO, countries must increase spending on primary healthcare by at least 1% of their gross domestic product (GDP) if the world is to close glaring coverage gaps and meet health targets agreed in 2015.

“If we are really serious about achieving universal health coverage and improving people’s lives, we must get serious about primary health care,” says Dr Tedros Adhanom Ghebreyesus, WHO Director-General. “That means providing essential health services like immunization, antenatal care, healthy lifestyle advice as close to home as possible – and making sure people do not have to pay for this care out of their own pockets.”

David is a Kenyan Journalist with a depth of experience in business, agriculture, technology, democracy and governance. He is passionate about health, youth engagement, women and girls’ empowerment issues that resonate with the Sustainable Development Goals (SDGs).