Kenya’s National Treasury has projected an overall budget deficit of 5.0% for the 2019/2020 fiscal year from a revised deficit of 6.3% of GDP in the 2018/19 fiscal year according to Draft 2019 Budget Policy Statement.

Henry Rotich, the Treasury CS says, “The fiscal policy in this BPS targets to support rapid and inclusive economic growth while ensuring a sustainable debt position and lower fiscal deficits.”

The BPS is themed ‘Harnessing “The Big Four” Plan For Job Creation And Shared Prosperity’.

As a result of the fiscal consolidation efforts, Treasury says the nominal public debt on a net basis (as a percentage of GDP) will reduce from the preliminary 51.5% of GDP in the FY 2017/18 to 43.3 percent in the FY 2022/23. “This will be achieved by putting more emphasis on the efficiency and effectiveness of public spending and improving revenue performance.”

The budget policy statement (BPS) is a Government policy document that sets out the broad strategic priorities and policy goals that will guide the national government and the County Governments in preparing their budgets both for the following financial year and over the medium term.

Read: Why Kenya is a Country of Concern for Investors and Markets – Analysts 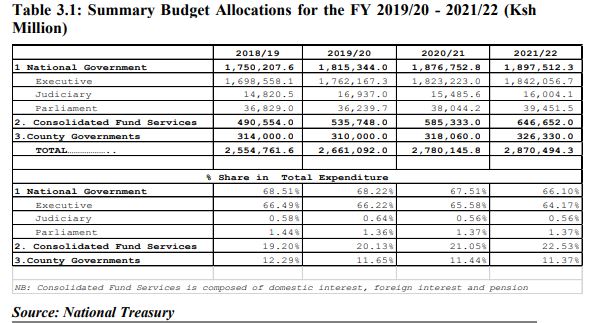