International passenger traffic growth in Africa has improved by 6.0% measured in revenue passenger kilometers (RPKs) in September, down from 6.8% in August according to the latest data from the International Air Transport Association (IATA).
Capacity rose 4.9% and load factor edged up 0.8 percentage point to 74.6%.
“The healthy growth is taking place against an increasingly challenging economic backdrop for the region’s largest economies of South Africa and Nigeria,” said IATA in its September report. 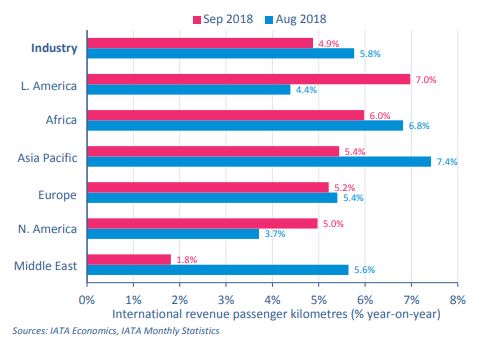 “While such growth was a slight deceleration from August, the bigger picture is that the upward SA demand trend remains strong, and annual RPK growth is still ahead of its five-year average (4.9%).”
However, global annual growth in industry-wide revenue passenger kilometres (RPKs) slowed to an eight-month low of 5.5% in September, down from 6.4% in August.
“While September’s traffic growth was in line with the long-term average, it represents a moderation compared to recent months. This is likely owing to the anticipated reduced demand boost from lower airfares due to rising airline cost pressures, particularly fuel. Heightened uncertainty about trade policies and mounting protectionist policies may also be having an impact,” said Alexandre de Juniac, IATA’s Director General and CEO.
Related:

80% of airtravel from #Africa to the world is controlled by non-African Airlines. To fix this, today, 23 countries, including #Nigeria, South Africa, #Ethiopia & #Kenya, agreed to a “Single African Air Transport Market”. It’s about time. We have been discussing this for years. pic.twitter.com/Yi6JtMSIHO

An IATA survey suggests that if just 12 key African countries opened their markets and increased connectivity an extra 155,000 jobs and USD1.3 billion in annual GDP would be created in those countries,” said Rapahel Kuuchi, IATA’s Vice President for Africa.
SAATM is a flagship project of the African Union Agenda 2063, an initiative of the African Union to create a single unified air transport market in Africa, the liberalization of civil aviation in Africa and as an impetus to the Continent’s economic integration agenda.