Today, the sugar industry in Kenya faces a serious challenge with local sugar growers worrying about their futures.

The Common Market for East and Central Africa (COMESA) safeguard measures protecting the industry from competition come to an end on 28 February this year coupled with potentially serious consequences, including the possibility of the entire sector going into receivership and out of business.

The commencement of Agriculture Sector Reforms is another worry for the farmers when the Agriculture Fisheries and Food Authority (AFFA) Act2013 and Kenya agricultural research and livestock Act 2013 that were gazetted in 2013 repealing 131 Acts of Parliament that govern the sector.

The AFFA Act seeks to scrap the Kenya Sugar Board (KSB) which has been a key stakeholder in the industry as a regulatory body charged with promoting the efficiency and development of the sugar industry, developing, promoting, coordinating the activities of individuals and organizations in the sugar industry and facilitating the equitable access to the benefits and resources of the industry by all interested parties.

“According to the AFFA Act the Kenya Sugar Board will be repealed on 24th January,” noted Simon Wesechere, the Sugarcane Farmers Union Secretary-General.

The Kenana Engineering & Technical Services Baseline Study for Sugar Agribusiness in Kenya 2013 Draft Report says that the sugar industry faces a number of challenges including, among others, capacity underutilization, poor transport infrastructure, and weak corporate governance. Additionally, the cost of sugar production in Kenya is more than double the cost of neighboring sugar producers.

The Farmer’s union boss raises concern that they are worried about the current trend within the Sugar Industry, “Nothing has been streamlined. They wrote and forgot. The government can be sued.”

In an interview with Mr Wesechere, he says cane farming is costly and there is need for subsidies for the farmers when it comes to inputs giving reference to cane farmers in other countries like Brazil, Malaysia and South Africa where subsidies for cane farmers is a ‘guarantee and not a question’.

The union says the government and the county government need to appreciate cane farmers for the role they play in saving the foreign exchange both direct and indirect.

However, he does not have kind words for the devolved governments whom he accuses of double standards.

“The Governors, Senators, County Representatives and the Members of the National Assembly within Western Province and Nyanza Province are all leaders from the local community; whatever they say and do defeats all reasons and purpose of economically empowering the farmer. Why propose tax measures that harm than solve?

He says, with the proposed tax measures, for instance, ferrying cane within Kakamega County a load of over eight tonnes will attract a charge of Sh1, 500 while heavy sugarcane trucks passing through will be required to pay Sh1, 000.

“It is the farmer being taxed, it is the farmer who is receiving low pay and at the end a negative pay. The farmer is being frustrated. They are adding more problems instead of solving them. They are thirsty for accumulating money. They are directionless. It is very sad,” he says.

The union blames the KSB for not implementing the Amended Sugar Act where the locals have a 51 percent ownership and the investor a 41 percent.

All is not lost, sugar cane is our lifestyle and a quarter of the country’s population should not be taken for granted he notes.

He says the time has come where we all need to seat together and discuss the future of the industry. Leaders need to come up with a memorandum for receiving new suggestions on the new reforms being spearheaded and the coming in of a liberalized market. 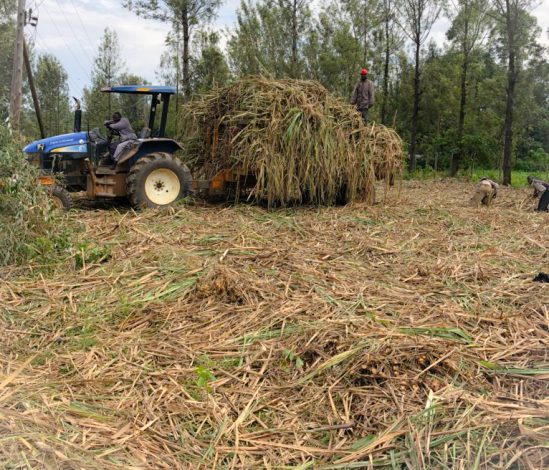 The Secretary-General proposes the following measures:

First, the sugar industry needs to focus on rehabilitating its existing facilities, enhancing production, and reducing the production costs, as a way of closing the gap in its local sugar production as the COMESA and EAC countries produce sugar at much more competitive prices than Kenya.

“The government had exhausted all its options when they sought for COMESA extensions to protect her struggling sugar sector. The extensions have served as a grace period for the government, millers and other stakeholders to come up with realistic plans for improving sugar production efficiency so as to be able to compete in the COMESA market and beyond without being accorded special favors. The government now needs to move with speed and haste before it lapses.”

This is in relation to the Trade Remedy Regulations.

Secondly, there needs to be an immediate structure to take over the KSB so that there is no vacuum as it has been playing a critical role of accounting the 7 percent sugar development levy of the market price charged by the Kenyan Government to cover for Cane Development Infrastructure, Factory rehabilitation, Grants to Research and KSB Administration.

He notes cane farmers to benefit from the money they remit, they need to have their own Sugar Cane Farmers Bank and not the Agriculture Finance Cooperation (AFC) which is a conglomeration of everything.

Thirdly, the 2010-2014 Kenya Sugar Industry Strategic Plan needs to be reviewed to see what has been achieved and not in revamping and resuscitating the sugar industry.

Wesechere says, if the country values the potential of the industry, then research and development will continue to be a necessary accompaniment in reforming the industry to enable it to be competitive and sustainable and to retain its important role in the national economy.

He says, cane farming is a cornerstone of the many livelihoods of the western people and it is expensive to bring a new enterprise to them like dairy and poultry farming to them, “It takes time.”

He advocates for a strengthened Extension Services Unit (ESU) to represents the important link between the Kenya Sugar Research Foundation, Cane Growers and the Manufacturing Sector of the Sugar Industry for technology to reach the farmers in new cane varieties, soil analyses for fertilizer recommendations, testing of agricultural chemicals and a host of other services available to both estates and farmers.

Finally, as cane millers continue to diversify into other co-products such as power co-generation, ethanol production, among other initiatives, farmers need to have an equal share of the produce from them as an additional income from the raw materials they use.

But still, Wesechere says, the farmers have to grow sugar if sugar mills are going to turn a profit. “We need millers and they need farmers.”