Kenya produces about 600,000 tonnes of sugar a year, compared with annual consumption of 870,000 tonnes thus, it is a sugar deficit country.

“Kenya is a deficit producer thus most of her production is for the local consumers,” Agriculture and Food Authority (AFA) affirmed in their E-bulletin that focused on the ‘Big 4’.

For instance, Mumias Sugar Company, the only listed cane factory at the Nairobi Securities Exchange (NSE) has received over KSh3.2 billion bailout by the Government into reviving it since 2013.

Muhoroni sugar has been shut down attributed to soaring debts and unpaid taxes.

Consequently, the Common Market for Eastern and Southern Africa (Comesa) safeguards that have been in place to protect millers from cheap sugar is coming to an end.

The government was to initiate a raft of measures to improve the service delivery of its ailing sugar industry after it was granted a one-year extension on sugar safeguards by the Common Market for Eastern and Southern Africa (COMESA).

The extension was to enable Kenya to complete outstanding sectoral reforms to make sugar production competitive.

On the other hand, the process of privatising the sugar sector by targeting strategic investors to buy it’s 51 per cent holding in the sugar milling companies while out growers and employees are to get a stake of 24 per cent.

The five owned parastatal sugar companies have over the years incurred huge debts due to inefficiencies, corruption, mismanagement and political patronage.

The five sugar mills are Chemelil, Muhoroni, Nzoia, Sony, and Miwani. Both Muhoroni and Miwani are currently under the official receivership.

It is a fact that, the debts that have been bedeviling the sugar sub-sector are built out of commercial loans and unremitted tax assessment and levies, sugar development fund (SDF) loans and third-party creditors which include sugar cane farmers unpaid arrears for cane harvested and delivered to the millers.

The sugarcane farmers debts are treated as unsecured third-party debts with no guarantee for a face value compensation open sale of these sugar companies’ assets.

This is a contentious matter since the debts were incurred in contravention of Sugar Act 2001 No. 10. Second schedule section 6. Whereas some of such debts in Sony, Nzoia and Mumias have been litigated at the regular law courts and the Sugar Arbitration Tribunal.

And with the expected new investors injecting substantial own funds to factory modernization and rehabilitation, the demand pressure on SDF loans for these activities will scale.”Such created reserve could utilize for upfront settlement of these farmers claims in totality either as a grant or long-term liability to the exchequer.

The farmers were further told that the five parastatal sugar companies Chemelil, Nzoia, Miwani Muhoroni and SONY are set to be privatized during the on-going government divestiture programme. This follows the cabinet approval in December 2008 and in line with the Privatization Act 2005.

Prior to Kenya’s independence in 1963, the sugar sector was purely in private hands. It was at the independence, that the government started playing a central role in the startup, ownership and control of the industry. And within a span of 16 years,5 factories were established. These were Muhoroni (1966), Chemelil (1968), Mumias (1973), Nzoia (1978) and Sony (1979).

The total government equity contribution amounted to 80 per cent. And with time, other privately owned sugar companies sprang up.
They included West Kenya Sugar Company Ltd, Kibos Sugar and Allied Industry and Soin Sugar in Kericho.

The un-utilized capacity could have produced an additional 23.93 per cent of sugar.

Sugar imports for the same period was 218,607 42 per cent of total production (excluding the smuggled ones) with an estimated value of Kshs 6.9 billion the Kenya sugar sub-sector has over the time become increasingly inefficient and uncompetitive and at the same time does meet domestic requirement.

According to the Kenya Sugar Directorate data, cane census carried out in December 2016 to assess sugarcane availability in the industry, the following observations were made:

Further, the Sugar production of 377,818 metric tonnes was recorded in 2017 compared to 639,742 metric tonnes achieved in the same period last year, representing a 41 per cent decrease.

“The low production is as a result of acute cane shortage experienced in most sugarcane growing zones due to weather vagaries,” reported KSD. 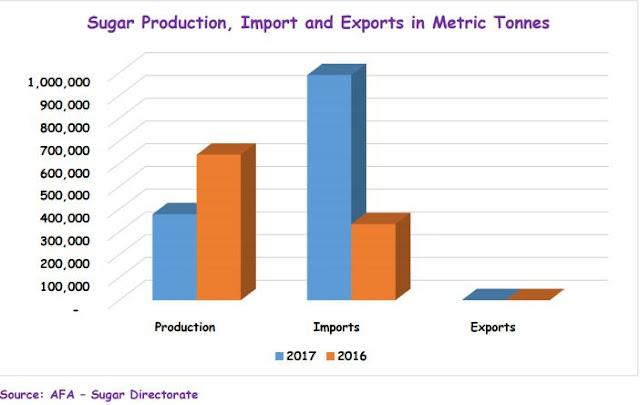 On the other hand, the sub-sector is a source of income generation for over 200,000 small-scale sugarcane farmers, and also supports over 6 million livelihoods within Western Kenya and its environs.

Read:  Is it gloom or hope for Cane farmers in Kenya?

The sugar sub-sector also has substantial financial input to the exchequer, local authorities and own revolving fund.