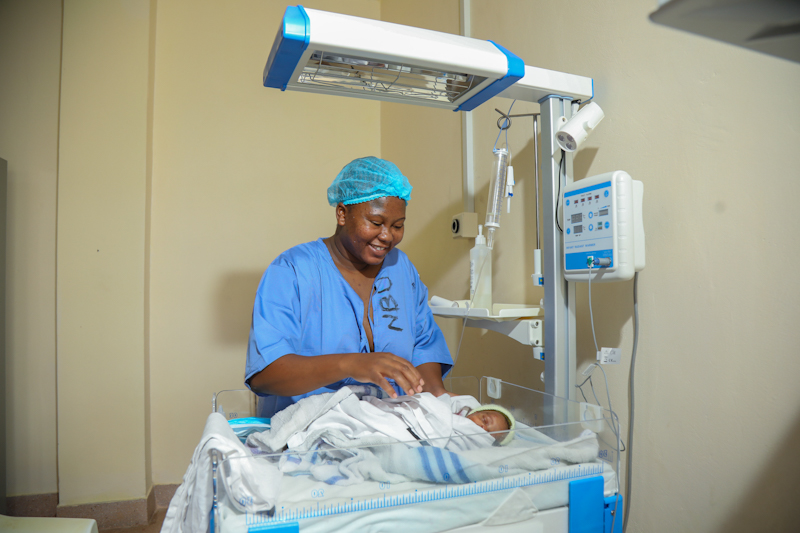 Joyce Kaingu, with her new born son during the opening of the Kilifi County Hospital fully equipped New Born Unit that was funded by Safaricom Foundation and Kilifi County government at a cost of KES 54 million.

For decades, child mortality has been a social and economic problem internationally.

According to the World Health Organization, nearly half (47 per cent) of all under-5 deaths occurred in the newborn period (the first 28 days of life) in 2020, an increase from 1990 (40 per cent) because the global level of under-5 mortality is declining faster than that of neonatal mortality.

According to the data, the most probable causes were childbirth-related complications (birth asphyxia or lack of breathing at birth), infections, and congenital disabilities.

Malnutrition, most common in Sub-Saharan Africa, is the underlying contributing factor, making children even more vulnerable to severe diseases.

For instance, a decline in child mortality has been witnessed in Kenya over the last eight years, as indicated in the 2022 Kenya Demographic and Health Survey report.

The probability of children below the age of five years dying (Neonatal deaths) within the first month of life stood at 21 per 1000 live births in 2022.

According to the data, Neonatal deaths account for 66 per cent of deaths of children below five years.

The latest estimates by the United Nations Inter-agency Group for Child Mortality Estimation released by the World Health Organization and Unicef show that Kenya recorded an estimated 27,000 neonatal deaths in 2021, a decline from 34,000 in 2000. Policies That Have Encouraged Reduced Mortality Rates in Kenya Overtime

The sector has witnessed increased government expenditure on health at national and county levels, enabling it to develop targeted public health initiatives like the Free Maternity Program, Beyond Zero, Linda Mama, and the Transforming Health Systems for Universal Care Project.

Maternity services in dispensaries and health centres, TB treatment, and immunization services in public health facilities are accessible. These have helped both the child and mother to remain healthy.

In 2020, UNICEF reported that over 88 per cent of children were fully vaccinated, up from 84 per cent in 2014. Vaccinations directly protect children against diseases such as polio and measles that can cause severe harm or death.

Fifty-one per cent of children under age 5 and 45 per cent of pregnant women slept under Insecticide-treated Nets (ITN) the night before the survey. Despite the notable improvement, the 2022 Demographic report highlighted that the country still has some gaps limiting its ability to achieve the Sustainable Development Goal (SDG) 3, which aims to reduce mortality rates to 12 per 1000 live by 2020.

Children still face the highest risk of death in the first 28 days –The neonatal period. This is probably due to a lack of checkups during pregnancy, unskilled antenatal care provision, and a lack of tetanus injections.

In Kenya, 75% of women with a live birth two years preceding the survey received sufficient tetanus toxoid injections to protect their baby against neonatal tetanus.

Child health and mortality consequences in Kenya generally depend on the economic circumstance of the household. For example, mothers’ outside work for low-income families may lead to child neglect, while wealthy families may hire a skilled nursemaid.

Other household variables like income and wealth affect the availability of goods and services, and assets owned by members of the household.