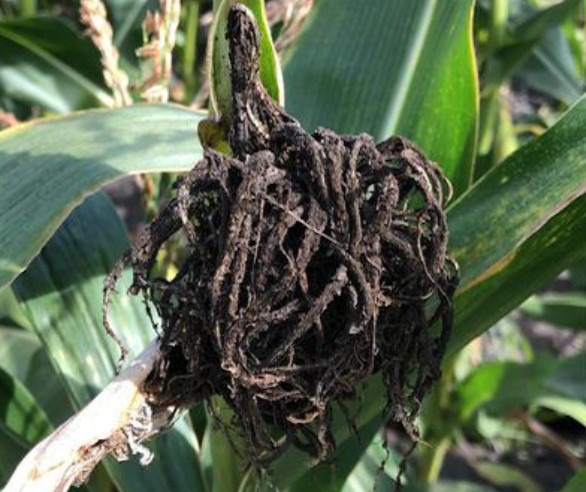 In his petition to the National Assembly, Mr Collins Kiplagat, a scientist and a former Kenya Seed Field Researcher, reveals that spore dispersal is projected to increase by approximately 70% in the next decade, which will result in dramatic low yields in affected areas and mainly maize-dependent regions.

In his research, a case study (H6213) in an uncontrolled infected soil field within a span of the past 4 years in EX Babuh Farm Chepchoina managed by Kenya Seed Company shows a loss of up to 478Kgs/acre with direct observation of 2 no silk or kernel on ears per 10m2 area (affected ears are in a teardrop shape and completely filled with black powdery masses), three infected tassels per 10m2 area, and a tangled mass of muscular strands mingle between spore masses. This forecasts a 10% drop in maize yields per acre over time.

“KALRO has made little to no effort since the fungi was declared a food security threat; in my conversation with Dr Eliud Kiplimo Kireger, the Director General during KALRO’s Open Field Day in Kabete, he said the government has not budgeted this project since 2016, and there is no option but to wait,” Kiplagat said.

He added that he had petitioned the Kenya Plant Health Inspectorate Service (KEPHIS) to be held accountable for approving low-standard seeds due to corruption and bribery in the field. In addition, he has called upon the Directorate of Criminal Investigations to investigate according to the filed petition, which will be mentioned on February 20, 2023.

Because maize is Kenya’s most cultivated crop and the primary source of dietary carbohydrates for humans, increased yields from approximately 25–53 per cent per acre were revolutionized by hybrid seeds developed from inbred and hybrid crosses starting with white dent maize seeds in 1905, according to Botanist Dr George Shull.

“Despite tolerant characteristics to other growth challenges, there is increased vulnerability to inborne fungal infection, and a decrease in maize yields continuously is very likely the result of incapacitation of different breeds to resist fungal infection,” Kiplagat reveals.

Furthermore, maize production in Kenya needs to be increased to meet the rising domestic demand from the growing population, livestock, and poultry needs.

According to the Ministry of Agriculture Kenya report 2020-2021, approximately 2 million tons of maize are imported annually to meet demand. This begs the question of what will happen if affected breeds are barred from further breeding due to intolerance or possible tumour-effect inheritance. Kiplagat asks

Kiplagat reveals, “The effort to solve food insecurity is, to begin with, quality seed, which we have failed to provide.”

The Invisible Force of Women in the Agricultural Sector

Kenya’s Inflation to Ease in 2nd half of 2023 -Analysts