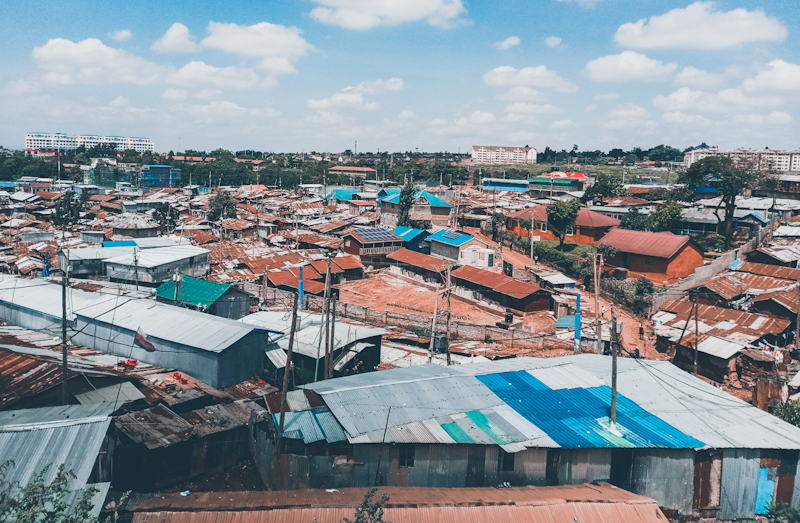 A section of Kibra area of Nairobi. PHOTO I Khusoko

Most Kenyans have grown more pessimistic about the economy, given the higher costs of essential commodities and low purchasing power.

The prices of essential products, such as milk, sugar, maize flour, bar soap, and cooking oil, have increased since 2020 when COVID-19 hit the country.

Coupled with other factors such as the Russia-Ukraine war and the drought across the country, the prices shot highest in 2022 and are expected to increase even further in 2023.

At the top of the list of the most expensive commodities in 2023 is cooking oil, which hit over 500 shillings per litre in early 2022 before slightly easing in the last few months of the year.

One litre of Fresh Fri cooking oil is currently retailing at 355 shillings at Naivas Supermarket, an increase of over 100 from 302 shillings in January 2021. At Carrefour, the commodity is selling for 374 shillings.

Meanwhile, a five-litre is selling for the cheapest at Naivas supermarket for 1,269 shillings and highest at Carrefour at 1368 shillings.

The food situation is similar for other African countries and the rest of the world. In December 2022, the Food and Agriculture Organization (FAO) Food Index report showed that world food prices dipped by up to 1.9 per cent for the ninth consecutive month.

FAO warned that countries must be prepared for the unseen shocks that are still yet to come in 2023.

“Calmer food commodity prices are welcome after two very volatile years,” said FAO Chief Economist Maximo Torero. “It is important to remain vigilant and keep a strong focus on mitigating global food insecurity given that world food prices remain at elevated levels, with many staples near record highs, and with prices of rice increasing, and still many risks associated with future supplies.”

The World Bank has projected that the new adverse shocks could tip the global economy into a recession.

According to the lender, global GDP is expected to rise 1.7 per cent this year, roughly half the rate predicted in June.

It also cut growth estimates for 2024, citing persistent inflation and higher interest rates as key reasons. It also noted the impact of Russia’s invasion of Ukraine and a decline in investment. Why Commodity Prices will accelerate further in 2023

Kenya has faced numerous economic challenges over the years, weakening its ability to ensure food safety- from COVID-19 in early 2020 to the Ukraine-Russia war that has directly affected the global and domestic market, a severe drought pushing over 4 million Kenyans into hunger.

According to the National Drought Management Authority report released in January 2023, the drought situation remains critical in 22 of the 23 Arid and Semi-Arid Lands (ASAL) counties due to the late onset and poor performance of the much-anticipated October to December 2022 short rains.

Currently, nine arid and semi-arid (ASAL) counties: Kilifi, Mandera, Marsabit, Samburu, Turkana, Wajir, Isiolo, Kitui, and Kajiado are in the Alarm drought phase while 13 counties are in the Alert drought phase according to NDMA.

The latest report by the Kenya Meteorological Department shows that the weather will remain drier in January and February.

The ongoing drought has caused the death of up to 2.5 million livestock and has put some 4.35 million Kenyans in dire need of humanitarian assistance, according to the KMD data.

The forecast shows that the expected dry conditions in January may negatively impact water catchments and thus interfere with the country’s hydroelectric power-generating dams.

Moreover, KMD warns that most parts of the country will experience high temperatures, increased malnutrition-related diseases in the northern region, and increased resource-based conflicts among the pastoral and farming communities due to limited pasture and water for their livestock and domestic use.

The authority said that national and county governments had spent more than 16 billion shillings, while development partners spent more than 47 billion on drought response. In addition, the new adjustment inflation costs that became effective in January will impact households negatively.

In a Gazette notice released on Friday, January 13, the Energy and Petroleum Regulatory Authority (EPRA) raised the inflation adjustment cost to 85 cents per kilowatt-hour (kWh) from 67 cents per unit due to high inflation.

This means that Kenyans will get fewer units of electricity from January to June 2023, for the same when compared to previous months.

EPRA’s decision to raise the adjustment cost came against high annual inflation that hit 9.1 per cent in December 2022.

Soaring food prices (13.8 per cent) and energy costs have been the primary drivers of the high inflation.

According to Economic Experts such as Churchill Ogutu, this adjustment will negatively affect basic commodity prices since fuel prices will likely increase with time.

“A significant increase in the inflation adjustment cost will lead to an increase in prices of other goods, which will then be passed to consumers,” Ogutu said.

Fuel prices for January 2023 remained unchanged for the third consecutive month since November 2022, according to the latest Energy and petroleum Regulatory Authority (EPRA) reports.

The high cost of living is therefore projected to continue rising further due to adjustments in the prices of essential and luxury goods.

The World Bank, however, says that significant reforms could be undertaken now to strengthen the rule of law, improve the outlook and build stronger economies with more robust private sectors and better opportunities for people across the globe.

The Kenyan Meteorological department has also advised the public to invest in water harvesting practices/techniques to harness the rainwater in areas where occasional rainfall is expected.

5 Coffee Habits You Must Check to Increase Your Lifespan