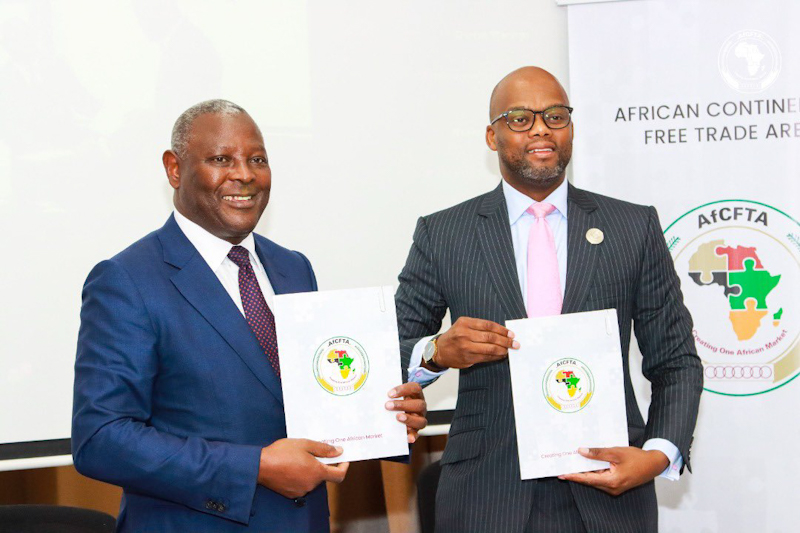 Dr. James Mwangi, Equity Group Managing Director and CEO (left) and H.E Wamkele Mene, AfCFTA Secretary General (right) display signed partnership agreement during the official launch of the partnership at the margins of the 41st Ordinary Session of the Executive Council of the African Union that will deepen the economic integration of the African continent.

In early March 2022, Equity Group launched a 678-billion-shilling private sector-focused package to accelerate African economic growth. The plan is focused on enhancing investments across various industries, among them the Micro, Small and Medium Enterprises (MSMEs) sector.

The Equity Group’s Africa Resilience Plan is envisaged to provide financing of up to 2% of the combined GDP of the six economies in Eastern and Central Africa. About 65 per cent of that financing will be directed to MSMEs.

The support will go a long way in connecting these small businesses into formal value chains to drive inclusive, broader, and more sustainable growth. The overall plan for MSME support is to transition from the consumption economy into a productive economy through entrepreneurship training.

The focus on the sector is due to these small businesses’ crucial role in the economy. MSMEs make up the largest indigenous capital and entrepreneurship vehicles, significantly contributing to local capital formation and employment.

As the backbone of societies worldwide, they continue to sustain livelihoods, particularly among the working poor, women, youth, and groups in vulnerable situations. The Equity Group looks at providing a holistic financial solution by connecting MSMEs to formal value chains to drive inclusive, broader and more sustainable growth.

The bank has rolled out a plan to lend and advance loans to 5 million MSMEs and 25 million individuals to stimulate the local community and population’s participation, specifically focusing on young people and women.

The viability of MSME support has been pilot tested and proven to work. In partnership with the Mastercard Foundation, Equity trained 436,000 MSMEs and extended support of 136 billion shillings to small businesses, which created 1.2 million jobs. This was achieved as the enterprises expanded and grew.

Equity will formalize the informal sector of MSMEs to achieve the Africa Resilience plan by linking them with formal manufacturing and primary food and agriculture sectors. It will also populate the MSME value chains and ecosystems to achieve growth and resilience while accelerating its recovery from the devastating effects of Covid-19.

The strong support for MSMEs will complement Equity Group’s overall plan to create 25 million direct jobs as businesses grow and a further 25 million indirect jobs as value chains expand and deepen. This aligns with Sub-Sahara’s need to create millions of jobs in the coming years to match the rising population.

By 2050, the global population is expected to grow by  2 billion. Half of that growth will occur in sub-Saharan Africa. This makes the region one of the world’s most dynamic economies and one of its most important markets. But there is a catch. Jobs will become scarce, and resource pressure will likely increase.

Of course, it is easy to whine about such overarching statistics, but there’s no denying that population growth needs to match the demand for jobs. But how will Africa achieve this?

Africa can bridge this gap by supporting the SME and the MSME sectors, guaranteeing economic growth and job security. It is, therefore, highly reassuring to see players such as Equity taking measures to ensure that MSMEs prosper.

And with the bank’s plan to boost the value chain stakeholders’ social and environmental transformation capacity, especially amongst smallholder farmers and MSMEs, productivity gains in African value chains will increase.

Folk Fusion ‘Glow Up Edition’ is Back; on 6th August at Levilla ...