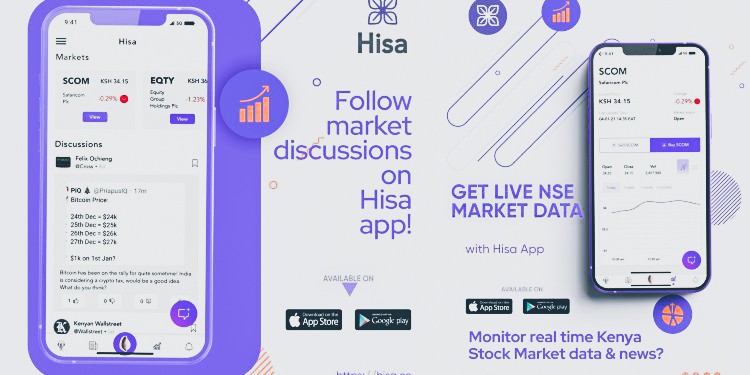 Hisa App, a mobile investment platform that allows anyone in Kenya to invest in U.S. stocks and ETFs using mobile money, is reportedly raising nearly $1 million to scale up and reach more users.

According to Eric Jackson, Director of Product & Innovation, Hisa Inc., they have mostly been a bootstrapped business.

“We are raising $1 million to help scale Hisa to more users and markets. Happy to talk to any venture capitalists and angels bullish about Africa! he says.

“Raising funds, especially in Africa, and with the current downturn, is very difficult and takes time. It’s best to plan a 6–9 month lead time for the runway. Fundraising is also a full-time job, so you pretty much do less of the other stuff,” he adds.

Since its launch on December 6th, 2021, the Hisa App has enabled users to get real-time market updates, follow market discussions, read business and finance news, and listen to hundreds of podcasts.

Seven months later, Jackson says they have been able to onboard 8,000 users. In addition to 5,469 trades, 318 withdrawals with stocks worth over USD350 hundred being traded.

On 6th Dec 2021, we officially launched @HisaApp after receiving a no objection from the CMA.

We have barely scratched the surface though. A few highlights/lessons 🧵

During the period, Hisa joined the Hindsight Ventures accelerator program to help them refine the business and also joined the NVIDIA Inception programme designed to nurture startups revolutionizing industries with advancements in artificial intelligence (AI) and data science.

“We have barely scratched the surface, though,” says Jackson.

Hisa is available on the iOS App Store and Google Play store.