President Uhuru Kenyatta has appointed Justice Martha Karambu Koome as the new female Chief Justice and President of the Supreme Court of Kenya.

Koome becomes the first-ever female to ascend to the apex of Kenya’s judiciary.

She will be deputised by another high flying woman, Justice Philomena Mwilu who was the second woman Deputy Chief Justice after Justice Nancy Baraza. 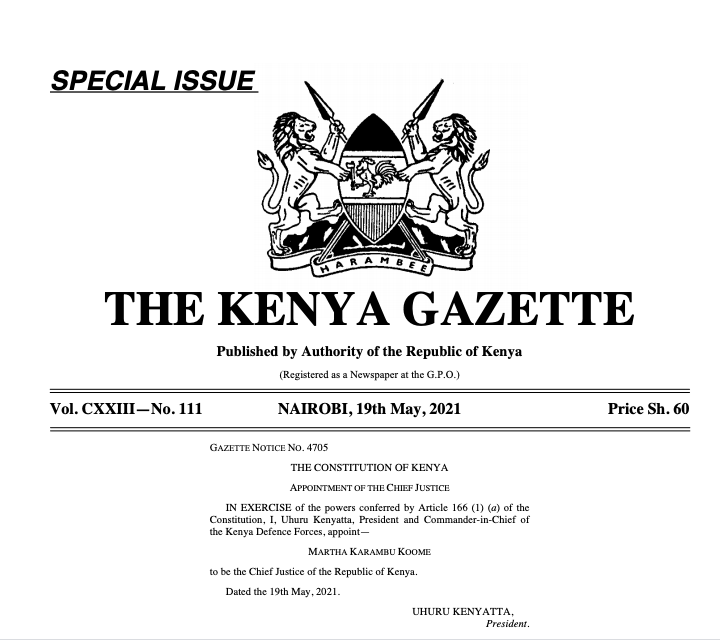 “In exercise of the powers conferred by Article 166 (1) (a) of the Constitution, I, uhuru Kenyatta, President and Commander-in-Chief of the Kenya Defence Forces, appoint Martha Karambu Koome to be the Chief Justice of the Republic of Kenya,” read the Gazette notice.

Justice Koome’s appointment comes barely hours after the National Assembly approved her for the top position in the Judiciary.

It also comes barely days after the Supreme Court got another judge following the appointment of Justice William Ouko who beat a battery of other renowned lawyers and judges.

The two assume office at a time when Kenya is in murky waters after the High Court declared decisions taken by President Uhuru such as initiating the BBI to be unconstitutional.

Chris Kirubi: What You Should Know About the Fallen Tycoon

Why It is Time to Treat the Internet as a Utility