Consequently, they warn that the destruction of crops and pasture across eastern Ethiopia and neighbouring areas of Somalia, parts of Sudan, Eritrea and northern Kenya with a high risk of further spread in the absence of immediate and significant scale-up in control activities.

“According to FAO, this is the worst situation in 25 years and unusual weather and climate conditions have contributed to it, including heavy and widespread rains since October 2019. A further increase in locust swarms is likely to continue until about June due to the continuation of favourable ecological conditions for Locust breeding,” said ICPAC, part of the Intergovernmental Authority on Development (IGAD) in Eastern Africa on Wednesday. 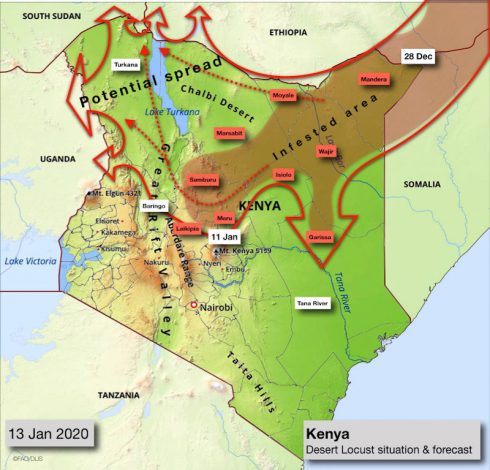 In Kenya, the National Treasury in collaboration with the Ministry of Agriculture has set aside Ksh230 million to support the containment of the locust.

According to the ministry, the money will be used to hire three more spray aircrafts to fight locusts’ swarms in Garissa, Marsabit and Mandera counties. This will be an addition to two aircrafts from the Desert Locust Control Organisation of Eastern Africa that have been undertaking aerial control of the insects

There has been a significant and extremely dangerous increase in swarm activity during the past week in Kenya where numerous, large immature swarms are spreading from the initial invasion areas of the northeast (Mandera county) south to Wajir and Garissa, west along the Ethiopian border (Moyale and Marsabit counties) and southwest into central areas north of Mt Kenya (Isiolo, Samburu, Meru and most recently Laikipia counties). One immature swarm was 60 km long by 40 km wide in the northeast.

More swarms are expected to occur in these areas, some of which are already moving north of Mt. Kenya westwards to the Rift Valley (Baringo county) where they could continue northwest to Turkana county, while others will move west along the Ethiopian border, and some swarms could move further south to Tana River county.

Regarding the locust invasion I wish to assure all that the Government is in control of the situation as most of the swarms have been controlled & the remaining 5 swarms are being monitored closely.
However,Kenyans should remain vigilant&immediately report any new swarms sighted. pic.twitter.com/XmFrhEOiVh

“IGAD calls on its Member States, the East African Community and partners to pull resources together to prevent, control and possibly eradicate the Desert Locust threat to the food security of the region”.

“Prevention and control measures must be scaled up to contain further spread of the Desert Locust”. “Countries must act urgently to avoid a food security crisis in the region” said Dr Workneh Gebeyehu, IGAD’s Executive Secretary.