A Euronext Amsterdam listing is expected to attract incremental tech investor capital which is well-aligned to our growth ambitions.

Naspers, a multinational internet and media group headquartered in South Africa has announced its intention to list on Euronext Amsterdam with a secondary, inward listing on the Johannesburg Stock Exchange in South Africa.

The firm also owns a large stake in Tencent, said it would rehouse its holding in the Chinese internet company and other international investments in a separate European listing. 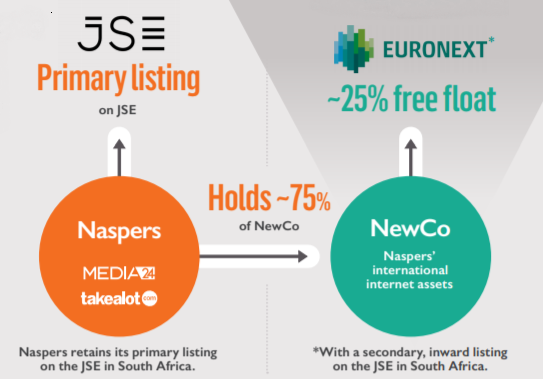 “ It will provide a strong platform to attract incremental investor capital, which is well-aligned to our growth goals. The listing will present an appealing new opportunity for international tech investors to have access to our unique portfolio of international internet assets.”

The transaction will be subject to the requisite regulatory and shareholder approvals being obtained. The proposed transaction is currently expected to be implemented no earlier than the second half of 2019.

After its listing, NewCo is likely to be Europe’s largest listed global consumer internet company by asset value. It will be 75% owned by Naspers.

Even after the listing of NewCo on Euronext Amsterdam, Naspers will remain the largest South African company listed on the JSE by market capitalisation, and Naspers will continue to invest in South Africa.

‘I have nothing against monkeys..they are smarter than a racist’ blasts Mario Balotelli