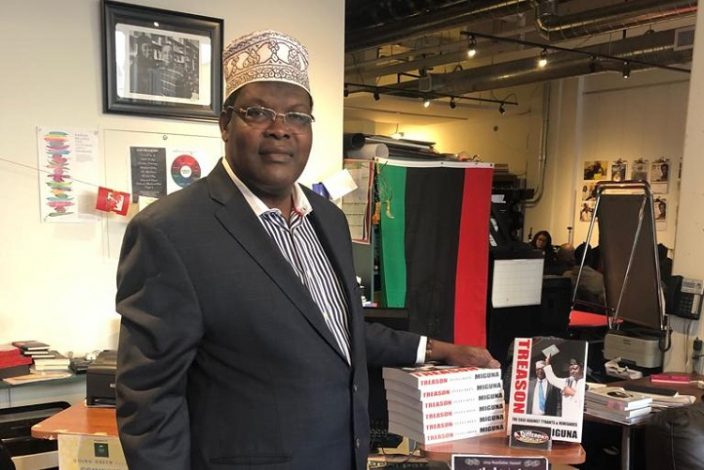 Pegged on claims of being enshrined in Article 1 of the Kenyan Constitution that was popularly promulgated by 68% of the vote on August 4, 2010, during a national referendum, which provides sovereignty vested on the people regardless of the government in place and the foundations of its establishment.

These are the sentiments one gathers from the eight pages, numbered 150 to 157, that Miguna Miguna shared on his social media platforms on the 1st of February 2018, from his new book Treason: The Case against Tyrants and Renegades.

These pages were shared under the pretext “Why NRMKe organized the November 17, 2018 Homecoming processing: its revolutionary significance and lessons.”

The 450 paged book published by the Integrity Books Limited and released on the 20th January 2019, and solely authored by Miguna Miguna, who now resides in Canada since his second deportation from Kenya on the 29th of March 2018 after the swearing-in of Raila Odinga as the people’s president at the Uhuru Park Grounds on 30th January 2018 on the grounds that he renounced his Kenyan citizenship and is now a Canadian citizen.

In the series of pages shared, Miguna Miguna seeks to expound on the logic behind the reason for the November 2017 homecoming of Raila Odinga, who was returning to Kenya after a whirlwind tour in America and Europe where he had gone to offer public lectures.

He claims, “The NRMKe made no secret of its plans, agenda, and end-game because they were firmly grounded on Article 1 of the Constitution…The NRMKe was not interested in replacing Mr. Uhuru Kenyatta with Mr. Odinga, per se… [the] short term goal was to ferment a constitutional and political crisis… his ascendancy to power would be a minor byproduct on the path of the revolutionary moment…it was a necessary first step; a precondition towards total liberation”

Among its plans for creating this crisis was the Homecoming of Raila on November 17, 2017, which was originally intended to be on a weekday in order to disrupt business in order to “have more devastating effects on the traffic and economy” but was instead moved to a Sunday since Raila and Orengo had their way.

Other plans to disrupt the economy and bring the reigning government to its knees was the swearing-in of Raila Odinga “as the duly elected President of the Republic of Kenya” (pg 150) and other boycott/resist and subsequent events.

He further writes “Homecoming events like the one we had organized for Mr. Odinga on November 2017, were neither novel, nor were they considered controversial, in Kenya. One of the most memorable homecoming processions in the country took place in 1992, when Kenneth Matiba…returned from an 11-month long medical treatment in London, UK…Two weeks before the 2002 general election, Mwai Kibaki, then a presidential candidate for…NARC…retuned to Kenya to a rousing welcome.”  (Pg 152 & 153).

In the subsequent chapters, he goes on to elaborate that the violence doused on them by the government “without provocation or justification” was because … “Whereas both Matiba’s and Kibaki’s respective homecoming processions were intended to launch, or further their personal campaigns and ambitions for political power… the procession organized for Raila on November 7, 2017 crystallized fifty-five years of national frustrations and radical struggles for the transformation of Kenya; the desire to remove the shacked of neocolonialism and achieve the original dreams of Kenya’s founding fathers…the restoration of public land…the restoration of dignity… and of bringing equity and social justice to all Kenyans…” (pg 153).

On that day, Miguna Miguna writes, the State “…want only destroyed or damaged…property…, hurling teargas canisters and shooting at unarmed civilians with live ammunition and rubber bullets, dousing them with corrosive chemicals… [and this NRMKe considered] as a declaration of war by the few who has illegitimately seized control of the state power against the majority.”

The treason, he asserts arose from his “erroneous assumptions about neoliberals”, those with whom he planned the aforementioned social revolution.

He writes “On careful reflection, perhaps trusting the neoliberals’ rhetorical intentions was the worst mistakes we made. We thought…wrongly…that selfish provincial neoliberal would…extricate themselves…from the state which created…them and gave them power and privileges they did not deserve and could never have earned in a merit-based society – and join us in the radical revolutionary struggle to transform the very state that had created them.” (pg 154)

He writes that NRMKe had a far-reaching revolutionary agenda that is “restructuring the architecture and foundations of the state and establishing people-based and people-oriented institutions… that would place the needs and interests of the people above everything else.”

It is the realization of this far-reaching agenda that “must have sacred the liberals, conservatives and neoconservatives and kept them awake in trepidation until they had to cross over and make up with Uhuru Kenyatta – in a mad rush.

As Raila Odinga would assert on March 9, 2018 after their handshake – Uhuru was indeed his ideological brother with whom they had, between 1998 to 2013, presided over the expansion of foreign capital interests from China, America and Europe.”

These are among the various excerpts that have been shared across his social media, that give a potential reader an idea of what to expect when reading the book.

Some of the excerpts are on the betrayal of Raila Odinga, some are on the reasons why he swore Raila in as the people’s president and why Raila “is mad.”

And while the bitterness of Miguna Miguna towards the failure of the aspirations of NRMKe cannot be lost on a reader, his unabated obsession with Raila does not escape a keen reader either.

To read this and more, you can purchase the book online. There are no known bookshops in Kenya retailing the book.

Never one to shy aware from controversy, Miguna Miguna further calls on those who refute the details of his book to write in depth critics and share.

Daisy Moraa  is a Career, Finance and  Lifestyle Content Creator A civil engineer by profession, she readily shares information to help entrepreneurs navigate the world of career, finance and in lifestyle matters.