Addis Ababa’s business has had to come to a temporary closure. It is election time. I had to send the children and her away when elections come we transmogrify into beasts.

In a very dark night just after I have sent my family to the village, like Nicodemus in that famous night wrapped in mysteriousness emerges Agostino. He comes with a curious proposal a week after dispatching my wife and children.

“Your credentials walk before you and we come to exhort you to piece a rag together.”  A man I have only up to now read in the News Time paper and heard on the radio, his face half in a Fidel Castro cap and a flashy black trench coat around his frame stands before me in flesh. I wonder whom he exactly means by ‘we’ in his exhortation.

Sofia hands are born to survive. Among the brigade, I convince to form my rag is Gengi Bengi Papa Bingi aka Pablo. A hypnotizing armed robber with a secret armory rumored to sleep on bank notes and a lover of playing drafts in Sofia’s idle hours. He becomes my right-hand man. Squad Kapedo is hatched from the incubation that we are freedom fighters. A new Boku–Omkhonto We Sizwe as I conceive it.

“This is life in Africa,” Pablo hails in our first informal meeting.

“We are not Africa. Have you lived in Ghana, Zambia, Zimbabwe or Katanga?” a scar-faced teenager probably sixteen, who has mastered names of American cities more than our own names, grunts in a husky breaking voice.

“Are they child molesters like Konyi?” Speri our collector of contraband tax chips in whimsically.

“The question is are we any better?” I conclude with that rather openly biased declarative question,

The last round of the general election campaign for the opposition veteran Agostino Mwakenya Ingwenje aka Lumumba hereby kicks off in such conspiracy. I feel elevated for the man to have himself crawled to me in the night. If he had come in the day I would have sung our heroes song mwanambeli on the rooftops.

“The majority of our Boku people live here.”  That is how our conversation to piece the rag started the night I have mentioned.

“Don’t bother to sir me brother, call me comrade.”

“We have been seeking the emancipation of Boku people diplomatically but reinforcement is inevitable.”

I wondered how much of it but I nodded in agreement.

“Time to send a statement- time to bite the bullet.” some tough looking bodyguards with him robotically nodded.

“True.” I nodded collaboratively but independently.

“I am told they threw you out of that rotten tribal intellectual dungeon.”

“Comrade Mwakenya…” he reiterated the correction with a pat.

“Yes, comrade Mwakenya sir. I owed the University fees arrears and had no money after my father’s demise. My mother had been retrenched from her tea service job in the Boku Sugar factory manager’s office.”

“I know. That sugar factory is dying anyway courtesy of the Abu corrupt managers. Soon our Boku people will have nowhere to sell their sugarcane. And that, comrade, is the reason you must take your role to send a statement very personal. Ask yourself why only our Boku boys were thrown out of that tribal academic dungeon. The others with a similar handicap but who speak the VC’s Abu tongue fart the VC’s fart,” my eyebrows twitched but he ignored and proceeded, “were allowed to flood bags of maize as fees in kind via the back door tendering.

How come the favour was not extended to you a very brilliant of our Boku minds. I will tell you , comrade. It is because you come from where the sun sets and they come from where the sun rises. They are aware that young brilliant minds from Boku people are a threat to their Abu political dominance so they cunningly have devised a system to purge our future brilliants, those who can shine enlightenment and stir a mental revolution in Boku like you, from the system.

Now you are living a life you never chose but a buffoonery Abu in a powerful position chosen. This election is not going to be the same. We must rise because it is a matter of yesterday.”

Whether it was mind washing or not I felt his truth. As he stirred the Boku political crowds our job began. The first assignment was to disseminate seditious propaganda leaflets from our command centre the emancipation room that backwater room where Adisababa had been selling her stews of poisons and weed.

Let me not forget to remind you that at the time, I was a cook but was having a hard time on the job because I had long hour strategic planning meetings at night. Then I had to turn in late and wake up early. My performance, of course, went south and I had encounters with my Abu lady boss uncountable times. Lately not once I had incurred her business losses by pouring sugar instead of salt into chicken stew. I was ever dozing dangerously before the boiler and for my safety, she quickly found my competent replacement. After she handed me my wages as par the law I baptized her with names like- barren hen and shouted to whoever cared that she had coccidiosis between her thighs. All was escapist ethnic bigotry because she had fired me for my own safety. Joblessness galvanized my political extremism. I drowned energy in the abstraction of emancipating our Boku people.

I swore and let my fragments of a rag swear on heavy marijuana that by any means necessary the man from Abu where the sun rises was not going to get a single vote from Sofia’s fragment of Boku territory.

Unflinchingly in the shadows of Mwakenya Agostino Ingwenje’s bankrolling we set two days before this Election Day on one last major statement. It was two days in a time of high emotions in which our mission was critical. We harnessed our tools and went to work at midnight. Our target stared at us indifferently when we clambered like ghosts up her Jericho tall walls.

Every comrade secured there appointed position and I hooted like an owl. Glass was smashed and the jerrycans in our hands like urine spilling from penises in the hands of playful boys splashed in zigzags on the oil paint within the walls at the signal. From reliable intelligence given by comrade Agostino, this building, a supermarket run by an Abu bbusinessmanhad secret vaults that kept ballots with the object of rigging the vote in Sofia. The problem was supposed to disappear and that was the assignment we were executing.

The building flared up in a hungry flame and we watched it in the camouflage of Sofiarians who had snapped out of their preoccupations in bewilderment.

“God help us, this election will bury us,” the hefty sweaty woman who hawks boiled sweet potatoes and ripe bananas around Sofia’s bars protested beside me wiping her brow with her greasy leso wrapper.

“Whoever did it is cursed,” I yelled above city council firefighter sirens that they arrived too late, the roof had caved in and gas cylinders were exploding.

“It must be those jackals,”

“Who?” my inquisition stopped her waving a hand in mid-air.

“Kapedo brigade,” she gave me a searching look in the light of the flames as if to ascertain that I could be trusted with her impending disclosure, her hand eventually resting on her chin.

She gave me a sympathetic look shrugged and tightened a knot on her leso around her waist.

Aren’t events but clouds and clouds move, much has passed. Pablo has been shot by the Special Forces this morning a day after our inferno and before this evening in which CQ my mistress lies cold like stale bread in sewerage. Though a dozen bullets riddled Pablo’s body he gunned down three of the Special Forces.

The supermarket, on the other hand, has been roasted to ashes and a loss of the destruction of property of unknown value announced. The election result is another conundrum a sober mind would rather leave to the insobriety of politicians.

With Pablo shot, my clandestine lover shot, the entire Kapedo squad muted there can only be one explanation. The gun is the new chief justice. A suspect only has one predetermined verdict.

This is the new world. I have tried getting in touch with comrade Mwakenya but my messengers keep disappearing. In the hush of retreating to my memory, I remember my wife.

Adapted from Writings on the Wall 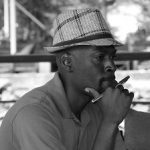 Abukutsa Moses studied English and Literature at The Masinde Muliro University. He currently teaches at a Secondary school in Busia County Western Kenya.

Alladin Rolls Out Book Category onto its e-commerce Service