Public transport was paralysed on Monday across the country over the withdrawal of matatus over the enforcement of Michuki rules.
On Saturday, the Federation of Public Transport Operators chairman Edwin Mukabana keeping off the roads will help them align with the traffic guidelines.
“The vehicles will be withdrawn from roads so that we do not find ourselves on the wrong side of the law,” Mukabana said.
This was in response to Interior Cabinet Secretary Fred Matiang’i and Mr. James Macharia who in Friday directed police to enforce the “Michuki rules” from Monday.
“We will stage a sustained countrywide crackdown on PSVs that have not complied with the NTSA Act 2013, the Traffic Act Cap. 403, and Legal Notice 161 of 2003 (Michuki Rules) as from tomorrow.”
Matiang’i said the crackdown was “To restore order and good management of the transport industry in our country.”
Data from the Kenya Roads Board (KRB), “Kenya road sub-sector accounts for over 80% of the country’s total passenger traffic and 76% of the freight leaving a small proportion to water, rail and transport.”
On the other hand, data from Trading Economics state that “GDP From Transport in Kenya increased to 83861 KES Million in the second quarter of 2018 from 76625 KES Million in the first quarter of 2018.”

source: tradingeconomics.com
What should PSVs do?
The Sessional Paper on Integrated National Transport Policy identifies the lack of an urban transport policy to address serious public transport problems facing major urban areas and cities in Kenya.
Consequently, the Legal Notice No. 161 of October 2003, commonly referred to as Michuki rules, addressed the issue of road safety by introducing the Legal Notice that amended the Traffic Act Cap 403 of the Laws of Kenya. 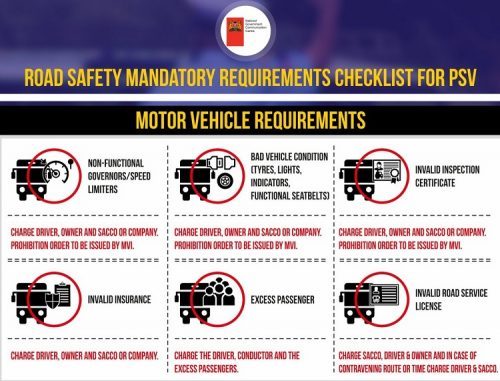 The Legal Notice was gazetted in January 2004.
Besides having the National Transport and Safety Authority (NTSA) and the Transport Licensing Board (TLB), sustainability to enforce regulation of laws in the matatu sector has not been achieved.
For instance, NTSA October report indicated an 8% rise in the total number of people who were killed in road accidents by September 2017 and the same period in 2018.
A total of 2,345 people in total had died by October 3, 2018 according to the Kenya Police Traffic Commandant Samuel Kimaru.

Kenya Airways to start weekly flights to Israel in March 2019

How Sistema is promoting biogas as cheap source of energy in East ...