Diaspora remittances to Kenya rise by 29.5pc to KES 255Bn in August

Kenya’s Diaspora remittances rose by KSh21.6 billion in August, pushing the annual diaspora remittance to a new high of KSh255 billion.
Monthly average inflows rose to KSh 21.2 billion in the 12 months to August 2018 from KSh15 billion over a similar period in 2017, representing 41.3 percent growth according to the latest data from the Central Bank
“In terms of the source market, remittances from North America remained dominant and accounted for 51.6 percent of total inflows in August 2018, while inflows from Europe and the rest of the world accounted for 33.2 percent and
15.2 percent, respectively.” 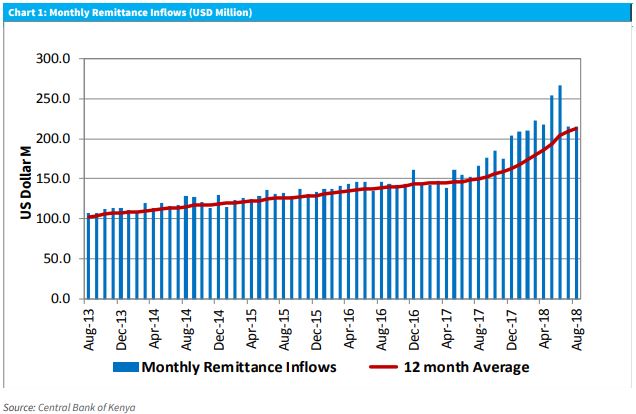 In June, monthly diaspora inflows of KSh26.6 billion were recorded with the US leading at KSh13 billion, KSh8.4 billion in Europe while Kenyans in the rest of the world sent home KSh5.1 billion.
A remittance is a money sent by a person in a foreign land to his or her home country. Due to the huge sums involved, remittances are now being recognized as an important contributor to the country’s growth and development.
Read: KQ Begins direct, non-stop flights to New York
The Institute of Chartered Accountants in England and Wales latest report ‘Economic Insight: Africa Q3 2018’, says, “Last year (2017), diaspora remittances were Kenya’s highest foreign exchange earner, overtaking tea, coffee, and tourism. Remittances contribute to financial services expansion and drive the growth of financial inclusion.”
It notes that recent entry of global payment and remittance firms into the East African market has eliminated significant barriers that have hindered consumers and businesses in the region from taking full advantage of remittances.
Others include the increased uptake of financial products by the diaspora due to financial services firms, particularly banks, targeting the diaspora, and new partnerships between international money remittance providers and local commercial banks making the process more convenient.
With improved remittances bank into the country, Cytonn Investments says it has been a contributing factor in strengthening the Kenyan shilling which appreciated by 1.9% year to date. Other factors that have contributed include the high levels of forex reserve currently at USD 8.4 bn, equivalent to 5.6-months of import cover, compared to the one-year average of 5.4-months.
However, the shilling is expected to remain under some pressure from higher fuel prices, unfavorable interest rate differentials and although the regulator should be at hand to ensure only a smooth depreciation according to CBA Analysts.