Kenya is among five countries that have been identified to have well-developed manufacturing sectors. The other countries include South Africa, Egypt, Tunisia, and Morocco.

The Brookings Institution paper ‘The potential of manufacturing and industrialization in Africa Trends, opportunities, and strategies’ written by Landry Signé in collaboration with Chelsea Johnson attributes this to the high scores for the pay versus productivity of the labor force, quality of electricity supply, and quality of transport infrastructure.

However, at continental levels, the paper observes that “Investment in manufacturing has also been uneven, with almost 70 percent of the continent’s manufacturing activities now concentrated in just four countries. In fact, most of Africa’s total Manufacturing Value Add (MVA)  is driven by the higher level of industrial development in North and South Africa.” 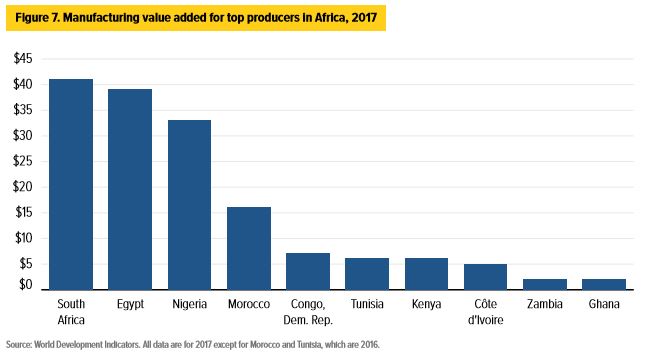 In Kenya, the sector has had an estimated annual average growth of 4 percent per year over the past decade, it now accounts for nearly 20 percent of economic activity and provides 12.5 percent of all formal jobs in the economy, about 280,000 jobs.

According to the World Economic Forum, Kenya is ranked 4th in Africa in terms of its competitive advantage on the international market, after the Seychelles, Ghana, and Zambia.

Kenya is also ranked the second-highest in Africa (41st in the world in 2017, following South Africa which is ranked 39th in 2017) in terms of innovation and sophistication, an indication of a relatively high-skilled labor force.

“In light of these expected trends, many analysts predict that Kenya will remain one of the top manufacturing exporters in the region over the medium to long-term,” writes Landry Signé.

The Kenya Association of Manufacturers (KAM) says this growth has been primarily been driven by the agriculture and services sectors.

“The country has thus experienced a premature deindustrialization as evinced by the decline in GDP contribution by the manufacturing sector  which was at a paltry 8.4 percent in 2017 and 9.2 percent in 2016,” KAM says in its ‘Manufacturing in Kenya Under the Big 4 Agenda- A Sector Deep-dive Report’ characterised by a rising share of the services sector in GDP.

However, the burden of unnecessarily costly and duplicative rules weighs heavily on their ability to grow and create jobs.

In 2016, John Page, from the Brookings Institution collaborates this when he wrote, “Whether Kenya can compete in manufacturing hinges on whether its firms can compete in capabilities. Public policy has an important role to play in capability building. For Kenya to seize the opportunities coming from changes in the global industrial economy, it will need to develop a new approach to industrial development.”

It further agrees that the sector’s share of GDP has remained stagnant with only limited increases in the last three decades, contributing an average of 10 percent from 1964-73 and rising marginally to 13.6 percent from 1990-2007 and averaging below 10 percent in recent years.

“Given the importance of the manufacturing sector for job creation, this weak performance is at a level too low to make a dent to unemployment or absorb the yearly increase in the labor market,” according to the December 2017 World Bank’s Kenya Economic Update.

Ms. Phyliss Wakiaga, KAM CEO in projecting the sector’s outlook, “We are keen in 2018 to implement some of the policy reforms and structural change that can lead to the growth of agro-processing at the manufacturing sector because we believe that is the future for growth.”

Besides success having been achieved to make the manufacturing sector as a top priority investment area, 2018 is no longer being projected as a year of ‘new possibilities’.

Mr. Sachen Gudka, Chairman KAM, “My expectations for 2018, I think we are gonna go down further which is a real shame given that under the manufacturing pillar of the ‘Big 4 Agenda’, we are actually supposed to deliver a compounded growth of 36 percent yearly and to generate a lot of jobs by 2022.”

“It is a high time all of us, the private sector and government took steps to invigorate this sector,” he adds.

Gudka says the decreasing optional spending from consumers is becoming a worrying trend for the sector due to higher taxation leading to decreased demand for goods citing the import declaration fee of two percent and the railway development levy of 1.5 percent.

“We have reached a tipping point of overtaxing consumers and the spending will go down,” Gudka says.
To secure investment in the manufacturing sector, the government needs to guarantee investors a stable policy environment, supportive taxation measures, and an investment climate that facilitates the growth of the industry.
Key areas that the association needs the  government to address as critical to a flourishing industry include:

One competitiveness that is cognizance of globalization of the world economy and reduction of trade barriers because of multilateral and bilateral trade negotiations.

Two, the fight against the illicit trade because its practice denies manufacturers legitimate market shares and adverse implications on reputation.

Finally, manufacturers require a predictable and stable policy environment due to the nature of production requiring long-term planning. “This suggests that ad-hoc policy pronouncements affecting industry should be avoided. This is more so when such policy pronouncements are made with little or no stakeholder consultations.”

Trust in God …but Tie Your Camel

Bundesliga plans to host games without fans until next year