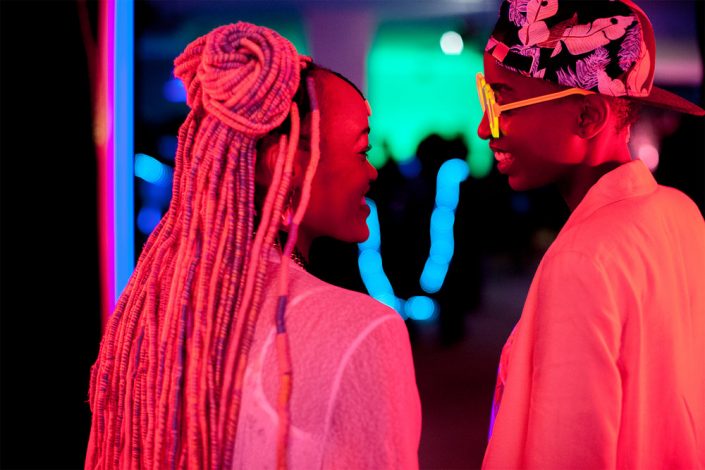 The High Court in Nairobi has suspended the ban on Rafiki film for seven days to allow the lesbian-themed film a chance to qualify for the Oscars.

BREAKING NEWS: High Court grants conservatory orders on a motion by Katiba Institute and others lifting the Ban on Rafiki movie by @InfoKfcb for 7 days for screening for adult audiences. This effectively means that Rafiki will be eligible to be shortlisted for the Oscars. pic.twitter.com/8c11go5GjF

Wanuri Kahiu sued the Kenya government after the Kenya Film Classification Board (KFCB) banned the film citing that it promotes lesbianism contrary to the law. The movie was adapted from Ugandan writer Monica Arac de Nyeko’s “Jambula Tree”, and it was 1st Kenyan film 2 screen at Cannes.

I am crying. In a french airport. In SUCH Joy! Our constitution is STRONG! Give thanks to freedom of expression!!!! WE DID IT! We will be posting about Nairobi screening soon. Follow @rafikimovie

The Kenya Films and Classification Board (KFCB) continued to vilify the movie stating, “It is a sad moment, not only to the film industry but to all Kenyans who stand for morality, that a film that glorifies homosexuality is allowed to be the country’s branding tool abroad.”

What pleasure, pray, does a person of a sane mind find in watching girls having sex with other girls?

In an interesting twist, Mutua through a tweet has issued threats to cinemas that may screen the film.

If people want to screen the homosexual film in their houses that's fine. We are watching to see which public theatre will exhibit it without the Board's approval

“Our enforcement officers and the police will conduct surveillance and random checks in all public theatres to ensure the orders of the court are strictly adhered to and no children are allowed to watch homosexual content. Proof that one is an adult will be required at theatres.”

In April,  the feature movie was banned from being screened in the country due to its lesbian content. According to the Kenya Film and Classification Board (KFCB) “Its homosexual theme and clear intent to promote lesbianism in Kenya is contrary to the law. Rafiki’ should NOT be distributed, exhibited or broadcast within the Republic of Kenya. Anyone found in its possession will be in breach of the law.”

Per the synopsis, “Kena and Ziki long for something more. Despite the political rivalry between their families, the girls resist and remain, close friends, supporting each other to pursue their dreams in a conservative society. When love blossoms between them, the two girls will be forced to choose between happiness and safety.”

According to Wanuri, “Making a film about two young women in love challenges the larger human rights issues associated with same-sex relationships in East Africa… My hope is that the film is viewed as an ode to love, whose course is never smooth, and as a message of love and support to the ones among us who are asked to choose between love and safety. May this film shout where voices have been silenced.”

On the other hand, President Uhuru Kenyatta during an interview on CNN reiterated that the country does not consider gay rights relevant as it goes against the cultural beliefs of Kenyans.

“I want to be very clear, I will not engage in any subject that is not of any major importance to the people and the Republic of Kenya. This is not an issue of human rights, this is an issue of society, of our own base as a culture as a people regardless of which society you come from. This is not acceptable, this is not agreeable,” he said.

The National Gay and Lesbian Human Rights Commission (NGLHRC) an organisation working towards the realisation of all human rights of individuals and groups in Kenya including the equality of Lesbians, Gays, Bisexuals, Trans*, Intersex and Queer (LGBTIQ) individuals in the Kenyan society is committed to promote dialogue on sexual and gender diversity and to advance the full participation, equality and inclusion of LGBTIQ individuals in the Kenyan society.

This is in pursuit of the national values of human dignity, equity, social justice, inclusiveness, equality, human rights, non-discrimination and protection of the marginalized as articulated in article 10 of the Constitution of Kenya.