A new report published by Cytonn Real Estate has found that opportunity in the retail sector in Kenya is within the county headquarters being driven by devolution and the increased retail business to serve the increasing urban population.
The data indicate that in Kisumu and Mt. Kenya regions, the retail space demand of 0.3mn and 0.2mn SQFT, attractive yields at 8.3 percent and 9.9 percent and occupancy rates at 96.3 percent and 84.5 percent, respectively, compared to the market average rental yield of 8.6 percent and occupancy rates of 86.0 percent.
Nakuru area has the lowest average rental yield of 6.9 percent.
This trend towards metropolitan areas and counties is because of the oversupply in Nairobi thus developers opt for other areas whose retail space supply is expected to grow by 2 year CAGR of 8.0 percent, 32.3 percent, and 32.3 percent, y/y according to the Cytonn Retail Report 2018, themed – Retail Sector Recovers in Key Urban Cities Except for Nairobi.
The data also indicates that “Nairobi has sufficient retail space supply factoring in incoming supply with a 2-year CAGR of 9.5 percent to 7.8mn SQFT in 2020 from 6.5mn SQFT in 2018.”

The study also notes that despite the high financing costs negatively affecting retail space development, but improved infrastructure is opening up satellite towns to mall development.
Interestingly, the study cites Kiambu Road and Limuru Road as the most attractive for mall developers within Kenya’s capital satellite areas. 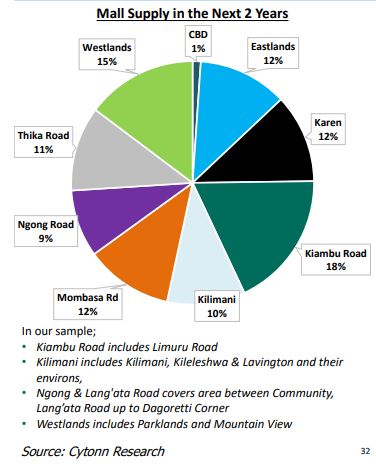 However, increased supply of malls in the same region – Two Rivers Mall, Ciata Mall, and expansion of the Village Market-  has resulted in stiff competition between them leading to a decline in occupancy rates.
“For example in Kiambu road, as a result of a 3.0 percent increase in space, occupancy rates have declined by 11.2 percent.  This is likely to result in the decreased development of malls in the City, already seen as supply increased by 4.8 percent between 2017 and 2018, compared to growth with a CAGR of 15.9 percent between 2010 and 2017.”
Cytonn further says “The retail supply is increasing at a decreasing rate, signifying that developers are cautious given the increased supply of approximately 4.5mn SQFT in the last 8 years.”
This collaborates Knight Frank’s 2017/18 Africa Report on Kenya that “Approximately 100,000 sq m of formal retail space was delivered to the market in 2016, up from about 50,000 sq m in 2015. As a result of this new supply, it has taken longer for space to be let and prime rents have stagnated.”
Kenya’s formal retail penetration is 30.0 percent making it the second highest in Africa, after South Africa’s 60.0 percent according to Nielsen Report.
The study on the supply of retail space was carried out in Nairobi Metropolitan Area, North Rift, South Rift, Coast, Western/Nyanza, and Mt Kenya regions.

Jumia Eyes More Revenue Through Brand Ads on its Platform