Why Restoring Credit Growth is Key to Kenya's Economic Recovery

David Indeje
0
35
Kenya Bankers Association has welcomed the National Treasury’s proposal to repeal the Banking (Amendment) Act 2016.
“It will pave the way for the Treasury and Central Bank of Kenya (CBK)  to work with sector stakeholders to chart the best way forward that serves the interest of the economy while promoting financial inclusion and consumer protection,” said Dr. Habil Olaka, chief executive officer, KBA in an op-ed in Daily Nation ‘Interest rate cap repeal can free credit market’.
According to Olaka, the Act was motivated by the need to increase credit uptake and to promote a savings culture through interest rate regulation. However, “The law is not achieving the intended objective but instead precipitated tight conditions of lending, occasioning a two percent credit expansion in the private sector.”
The capping of interest rates constrained banks from lending to SMEs and the private sector, and as a result, preferred to invest in risk-free government securities that offer higher returns on a risk-adjusted basis.
“The law effectively benefits the rich, not ‘Wanjiku’,” he emphasizes.
Read: Kenya Needs a Centralised Information Database For its SMEs
The CBK in its draft report, ‘The Impact of Interest Rate Capping on the Kenyan Economy’ that called for public comments stated that using bank-level data covering the period before and after the interest rate capping law, coupled with selected macroeconomic indicators, their  analysis showed that interest rate caps had started to yield negative effects. “It is found that under the interest rate capping environment, monetary policy produces perverse outcomes.” 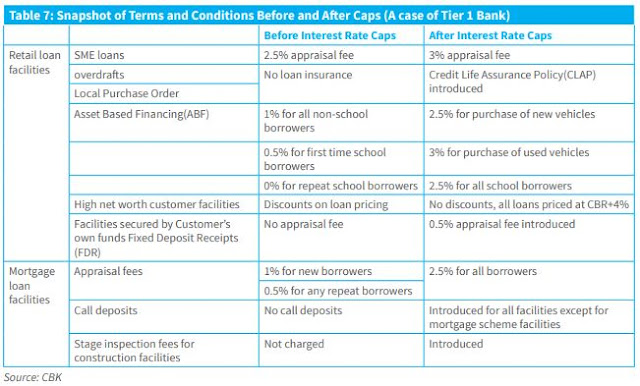 For instance, in Cytonn’s Q1’2018 results for the eleven listed banks,  investment in government securities has grown by 25.0%, outpacing loan growth of 3.2%, showing increased lending to the government by banks as they avoid the risky borrowers.
On July 28, 2016, the National Assembly passed Banking (Amendment) Bill, 2015 regulating interest rates that are applicable to banks’ loans and deposits, capping the interest rates that banks can charge on loans and must pay on deposits.
Before, Cytonn Investments compared “The interest rate cap bill to Brexit – a very populist move, fueled by anger, but an equally unwise move that we may quickly regret.”
“While the prospects of getting loans at 14.5% and receiving 7.35% on deposits seem attractive, a closer analysis reveals that in reality, rate caps would have significant negative effects such as reduce access to funding, slow the economic growth and ultimately reduce the standards of living,” Cytonn Analysts had observed.
On the other hand, besides Kenya is ranked as the fifteenth most attractive economy for investments flowing into the African continent, according to the Africa Investment Index 2016 by Quantum Global’s independent research arm, Quantum Global Research Lab, Prof Mthuli Ncube, Head of Quantum Global Research Lab states, “Supported by a stable macroeconomic environment, Kenya presents investors with relatively high exchange rate risk, low levels of liquidity and very low import cover.”
“However, going forward, the government policy of capping domestic interest rates is limiting growth on domestic credit to the private sector. This has the potential of being a drag on future economic growth, in an otherwise dynamic economy,” he adds.

“However, if the proposal by the National Treasury to repeal the interest rate cap is implemented it can result in upward pressure on interest rates, as banks would resume pricing of loans to the private sector based on their risk profiles. However, with the cap still in place, we maintain our expectation of stability in the interest rate environment,” Cytonn observes in their latest review of H1’2018.

Commercial Bank of Africa Limited (CBA) Researchers observe that with the Kenyan economy rebounding strongly in the first quarter of 2018, “Restoring credit growth, as a catalyst to investment and consumption will be fundamental.  Although the deceleration in credit expansion may have bottomed out, lending growth remains significantly below levels consistent with the 5.5% average growth of the last five years.”
TagsKenya BankersRate Cap
Previous Article

Kenya’s Hospitality Sector to Bounce Back in 2019 – PwC