Retail businesses, finance, banking, and investment have been revealed as the most profitable sectors for generating wealth in Kenya,  according to data provided by Wealth-X for the Knight Frank Wealth Report 2018.
The 12th edition of The Wealth Report percentages revealed that the retail businesses (18%); finance, banking and investment (18%); industrial businesses (8%); and manufacturing (6%).
The majority of Kenya’s affluent are self-made (56%), 5% have inherited, while 39% have made wealth both from inheritance and their own enterprises.
Further, it highlighted that Kenya’s high net worth investors with KSh 500 million in assets increased by 16 percent in 2017 to hit to hit 1, 290 compared to 1, 110 in 2016. Out of the 1,290 individuals, 90 are worth KSh5 billion or more.
However, Kenya has less than 10 individuals worth KSh50 billion or more.

According to the Attitudes Survey insights, respondents said 46 percent of their Kenyan high net-worth investors’ clients are considering investing in property locally in 2018.

The wealthy are more interested in investing in offices at 39 percent; a residential and agricultural property at 28 percent; student accommodation and logistics/warehouses at 22 percent; infrastructure at 17 percent; industrial at 11 percent; and healthcare and retirement housing at 6 percent

Ben Woodhams, Managing Director at Knight Frank Kenya, said: “This expectation of increased wealth underlines the confidence that Kenyan HNWIs have in the future economic performance of the country.”
The Attitudes Survey, which collated responses of 500 of the world’s leading private bankers and wealth advisors, consistently showed that passing wealth to the next generation remains a major concern for the wealthy globally.

Andrew Shirley, Editor of The Wealth Report, said: “Fear that their children will fritter their inheritance away, the worry that passing on too much too soon will dampen their offspring’s entrepreneurial spirit, or simply concerns about how to treat siblings fairly—all weigh on their minds.”

Indeed, most Kenyan HNWIs have yet to put robust succession plans in place, with only 40% of respondents to the Attitudes Survey in the affirmative. This is the lowest percentage of succession preparedness worldwide, against a high of 65% in the US, the global average of 53% and Africa’s 47%.

The sector is characterized by a growing young upwardly mobile and affluent middle class, rapid urbanization and growing internet and smartphone penetration are among the many reasons for the driving force behind the growth of the retail sector.

Real estate company Cytonn Investments has maintained a bullish outlook on Kenya’s retail market given the strong consumer spending propelled by an expanding middle class and a conducive macroeconomic environment.

Cytonn in their weekly investor brief, “The retail sector is expected to record increased activity in 2018 as seen through retail chains unveiling expansion plans.”

Cytonn Investments Senior Manager, Regional Markets, Mr Johnson Denge in 2017 said, “The sector is projected to have a growth Compound Annual Growth Rate (CAGR) of 7.4 percent in the next 2-3 years.” “We expect less development of brick and mortar malls and more growth in terms of expansion from foreign retailers,” he added.
Finance, Banking and Investment

A survey of the stock markets of 17 African countries by Barclays Africa Group has rated Kenya’s financial markets the most advanced in the East African region and 5 th with a score of 59% in the continent ahead of economic giants like Nigeria (53 %,) Ghana (49%) and Egypt (39%). South Africa with a score of 92% was ranked first. 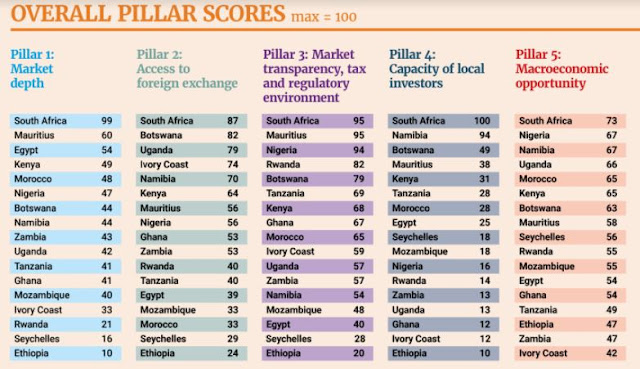 Kenya scored the highest ranking in East Africa attributed to its strong contract enforcement policies, market depth as well as the capacity of local investors, ahead of Uganda, Tanzania, Rwanda and Ethiopia.

It outpaced its East African peers in the market depth pillar, which focussed on areas such as the range of financial products, currencies and hedging options available and capacity of local
investors’ parameters.

The Central Bank of Kenya (CBK) has maintained “The (Kenyan) banking sector remains stable and resilient.”

If You Have $5, Zendaya Found the Spring Collections