Close
Tweet
When all Kenyans have opportunities to create and grow their own small businesses, to own an affordable home, save college funds for their children, to invest and save for retirement, the country will have a sustainable and flourishing economy.

However, this is not the case.

Kenya is at a center stage where despite the immense percentage joining the job market from the tertiary institutions in line with the Vision 2030 -where its development will be driven by middle-level skills that are technical and hands-on – the quality is being questioned.

This is a reflection across the East African Region, The Daily Monitor in its article, Ugandan pupils worst at counting, reading in EA from the Uwezo East Africa 2013 findings show there are large differences in learning achievements among the three countries with Kenya performing better at 68 percent in both numeracy and literacy skills compared to Tanzania at 50 percent and Uganda at 38 percent.

However, despite Kenya doing better, the report titled, “Are Our Children Learning? Literacy and Numeracy Across East Africa 2013” stated that “…it is home to the worst-performing districts in the region demonstrated in stark inequalities.”

On the other hand, a report released by the Kenya Institute of Public Policy Analysis and Research (KIPPRA) “Kenya Economic Report 2013 – Creating an Enabling Environment for Stimulating Investment for competitive and Sustainable Counties,” shows that Kenya’s labour force has relatively low education attainment compared to middle-income countries. About 65 percent of the population has only primary or incomplete secondary education, while another 10 percent has never attended school.

This is in contrast to the Vision 2030 goal where Economic transformation requires skills and innovation, which make the development of human capital key for county development.

In contrast, the report cites that the financial sector plays a critical role in the development process. However, it calls for strategies that can enhance long term capital.

The key is bridging the poverty gap currently between 44 and 46 for the last six years where poor people in the rural areas have, on average, much lower incomes compared to the poverty line, and their income distribution does not seem to change much over the years.

This is because many are employed within the informal sectors that are characterized by low productivity, low pay and high levels of unpaid family employment. Informal sector employees are also often excluded from social security schemes, and labour protection legislation.

Grain Fish Money Africa Progress Report 2014 released during the 24th World Economic Forum Africa Abuja, Nigeria by the Africa Progress Panel noted that “Africa may be showing impressive headline growth, but too many of our people remain stuck in poverty.”

“This year’s Africa Progress Report finds that if we want to accelerate Africa’s transformation, then we have to significantly boost our agriculture and fisheries, which together provide livelihoods for roughly two-thirds of all Africans,” Kofi A. Annan, Chair of the Africa Progress Panel.

The forum centered by the theme of forging inclusive growth and creating jobs for Africa’s growing population.

The report says education is a constraint. “When it comes to transformation, a skilled workforce maters – and Africa has a large skills deficit. In an increasingly knowledge-based global economy, these education gaps limit the potential for transformative growth.”

The Panel proposed five key areas as practical areas that could meet the challenges.

A key recommendation was of inclusive growth and expanded opportunity as essential to eradicate poverty linked to the Post 2015 development agenda. According to the report, “The percentage of Africans living in extreme poverty has declined by 10 points since 1999, but the absolute number of poor has increased with population growth. Almost half of Sub-Saharan Africa’s people – 413 million – live below the US$1.25 threshold for extreme poverty.” 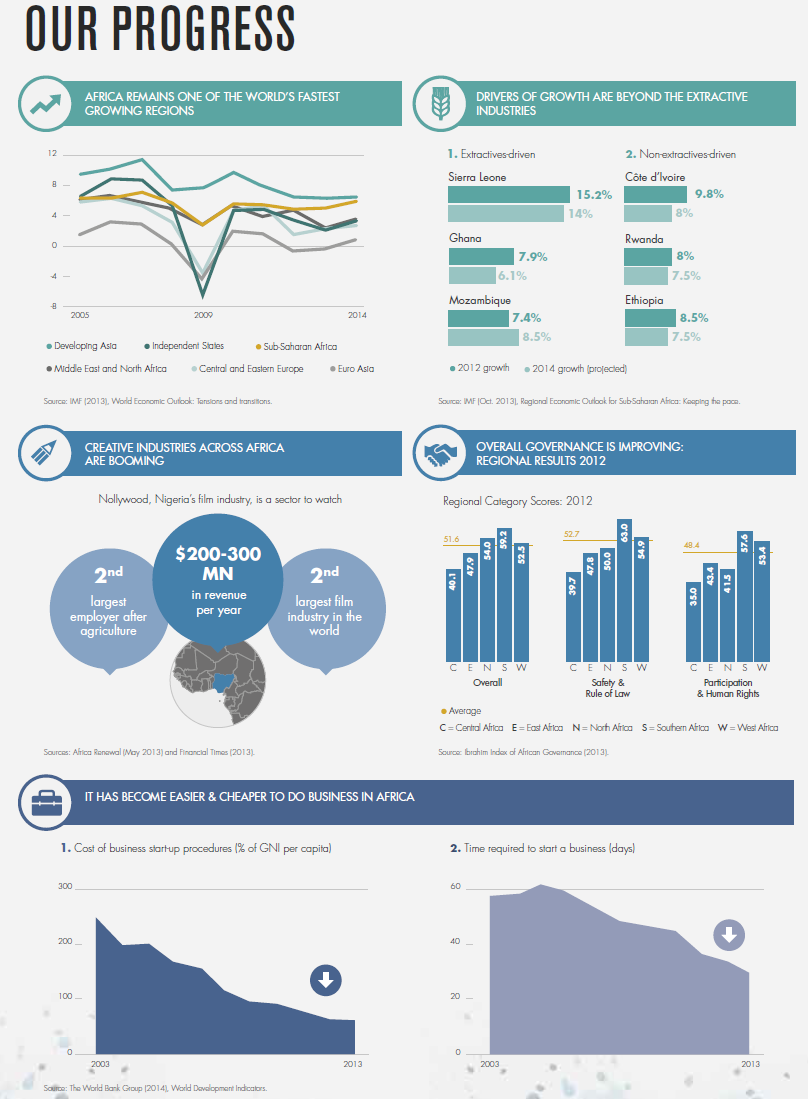 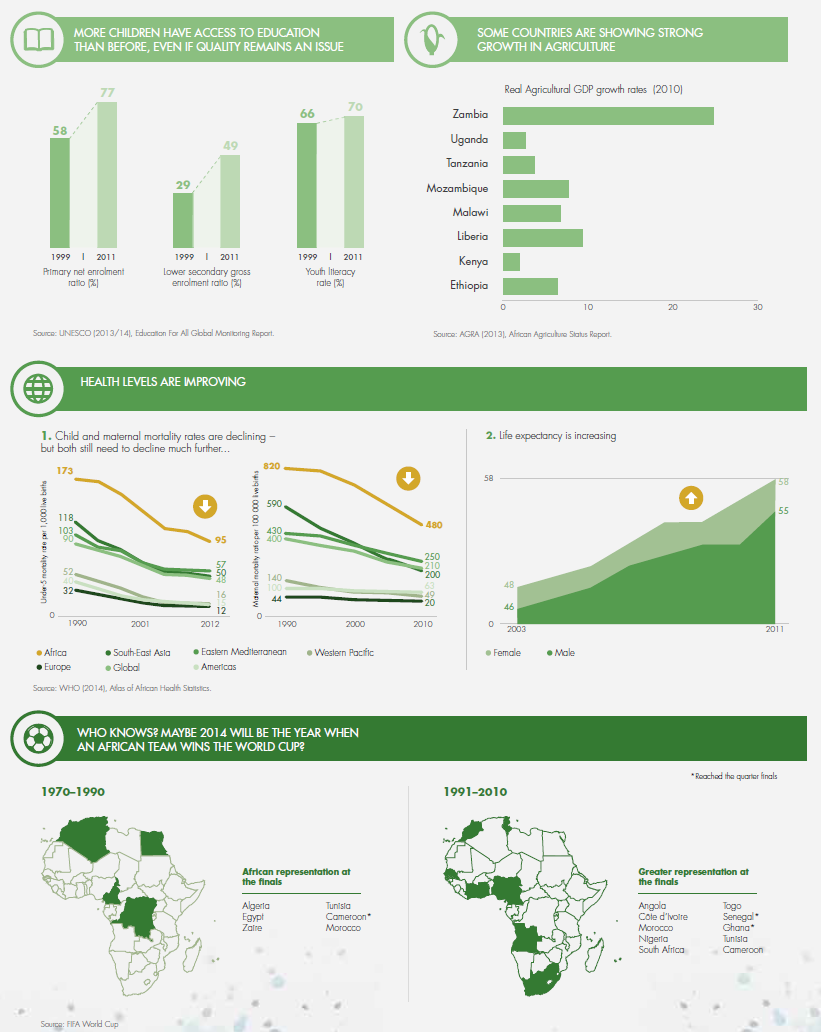 “The percentage of Africans living in extreme poverty has declined by 10 points since 1999, but the absolute number of poor has increased with population growth. Almost half of Sub-Saharan Africa’s people – 413 million – live below the US$1.25 threshold for extreme poverty.” 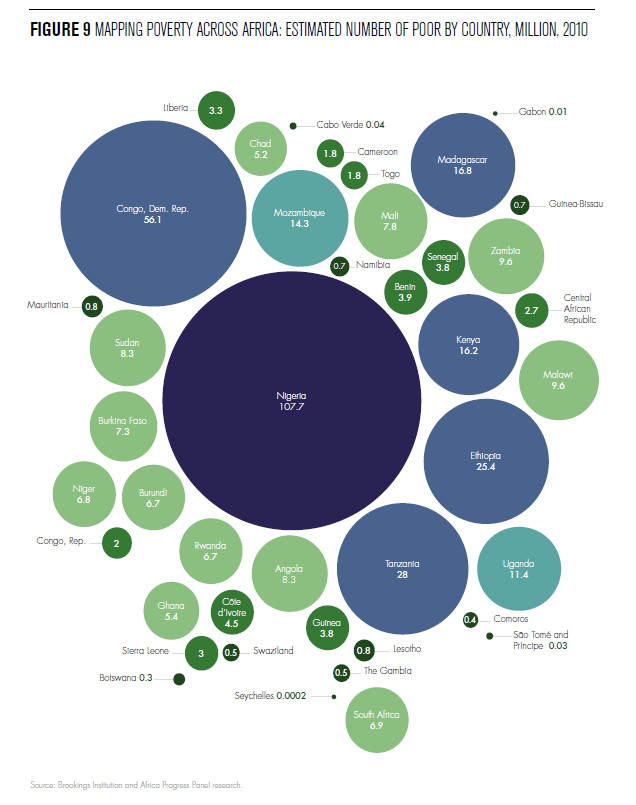 To make a turnaround, it says,

“For Africa, the policy objective should be on growth with redistribution; in other words, making sure the poor receive a higher share of any increment to growth than their current share. This challenge turns the spotlight squarely on the composition of growth and the imperative to increase agricultural productivity.”

On the other hand, the International Monetary Fund (IMF) Regional Economic Outlook for Sub-Sahara Africa- Fostering Durable and Inclusive Growth report released in April 2014 notes that Sound economic policies, stronger institutions, and higher levels of public and private investment have ensured a sustained economic growth in most African countries. As a result led to higher standards of living, poverty reduction and improved social indicators.

And to make growth more inclusive, IMF says the overarching policy challenge is to create conditions for taking advantage of a possible demographic dividend.

It proposes two policy areas that need to be focused on.

First, expanding job opportunities is essential for both further raising per capita GDP growth and reducing poverty. We show that household enterprises are the most likely source of jobs for the majority of the population in sub-Saharan Africa, at least over the short and medium-term.

Policies should focus on removing obstacles to investment in the service and agricultural sectors—where the bulk of household enterprises perform their activities. The resulting productivity gains would favor the structural transformation process that would shift labor out of agriculture.

Second, financial inclusion can play a key role in improving welfare for the poor, and in removing financing obstacles to entrepreneurial activity. Here, the policy emphasis should be on creating an enabling environment to reduce transaction costs by exploiting new technologies, such as mobile and agent banking.

In comparison with the Africa Progress Report, IMF emphasizes the need to invest more in human and physical capital, both private and public in order to raise agricultural productivity and encouraging economic diversification.

This can be achieved by governments providing the following:

A business environment that does not overburden them with taxation or regulation. At the moment, household enterprises often pay taxes at a higher rate than large businesses, but receive little in return.

Supplementary services such as security, sanitation, electricity, transport, and water supply, among others, that could be thought of as the business infrastructure of the economy.
Technical training on job-relevant skills, including business and financial literacy skills to help improve human capital.

Raising productivity in the agricultural sector through appropriate land reform accompanied by improvements in physical infrastructure and increased crop yields. This could assist the structural transformation process and generate widespread economic gains.

Policies for financial inclusion that permit their access to financial services (including credit, banking services, and insurance products).