The global phenomenon of people’s mobility is true, with us, thanks to advances in technology. The “global village” prophecy has become a reality- international schooling, business or trade development, immigration with related problems like those of refugees or displaced persons. And the trend is that people from foreign and alien cultures will be brought closer together at an even more accelerated rate.

Within the same cultural boundaries, we see more and more cases of minorities asserting themselves. All these cases have had profound effects on the field of communication.

However, they also remove journalists’ monopoly on international news, forcing a re-evaluation of who creates, transmits and ultimately owns the news (Knight, Alan: 2001).

New forms of communication are r 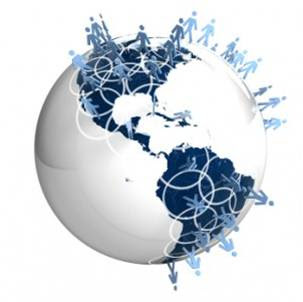 eshaping the practice of a once narrow-minded craft serving a local, regional or national public.

Today, news media use communication technology to gather text, video, and images from around the world, with unprecedented speed and varying degrees of editorial control.

The same technology allows news media to disseminate this information to audiences scattered around the globe.

Consequently, this global phenomenon raises three questions that affect the practice of journalism:

On the plus side, globalization of news helps demolish national censorship regimes which may have created state-constructed fantasies at odds with local realities.

On the other hand, however, these same more sophisticated media handling techniques act to exclude journalists from directly witnessing the events they are supposed to report on.  Through globalization, journalists are becoming increasingly dependent on the internet as a source for their stories. This justifies the growing importance of the interactive internet as a source of information for journalists (reliance on secondary sources) rather than going direct to the source.

The pressures created by live global broadcasting force many to rely on accounts already prepared and sanctioned by the authorities.

And the Internet now allows news sources such as governments to distribute their own material directly to local news outlets. They bypass foreign correspondents and even international news wholesalers such as news agencies.

Therefore, on the practice of journalism, the internet has encompassed a shift in who creates, distributes, and ultimately owns the news. It increasingly shapes the ways journalists communicate, construct their stories, publish their material and interact with their audiences.

News media now inhabit a radically pluralistic, global community where the impact of their reports can have far-reaching effects — good or bad. News reports, via satellite or the Internet, reach people around the world and influence the actions of governments, militaries, humanitarian agencies, and warring ethnic groups. A responsible global ethic is needed in a world where news media bring together a plurality of different religions, traditions, and ethnic groups.

One responsibility is to report issues and events in a way that reflects this global plurality of views; to practice a journalism that helps different groups understand each other better. Reports should be accurate, balanced and diverse, as judged from an international perspective.

Biased and parochial journalism can wreak havoc in a tightly linked global world. Unless reported properly, biased reports may incite ethnic groups in a region to attack each other. A narrow-minded, patriotic news media can stampede populations into war. Moreover, journalism with a global perspective is needed to help citizens understand the daunting global problems of poverty, environmental degradation, technological inequalities, and political instability.

Consequently, this prompts for the need for global ethics because of the following reasons:
(1) Practical: a non-global ethic is no longer able to adequately address the new problems that   face global journalism, and
(2) Ethical: new global responsibilities come with global impact and reach.

Globalization may overwhelm local perspectives. Research shows that independent local sources are frequently ignored by foreign correspondents seeking to efficiently supply distant editors servicing home audiences. Even the best-equipped and trained foreign reporters may be hindered by a lack of local knowledge or cultural insensitivity. This is because there are narrower news values powered on a cycle of misinformation. Meanwhile, governments and NGOs exploit these journalists’ weaknesses, avoiding reporters, and delivering ‘authorized’ and unquestioned information to news audiences.

What is the Bearing of Culture on Journalistic Ethics?