The company attributed the loss to the depressed valuation of the company’s inventories in the form of land and uncompleted houses which contributed up to KSh.391 million of this loss.

“The decline is attributed to the impact of the slowed growth in the economy in general and real estate sector in particular and the depressed valuation of the company’s assets in the form of land and buildings. The Board has put in place measures to ensure that the company reverses this position sooner rather than later,” reported the firm in its financial report. 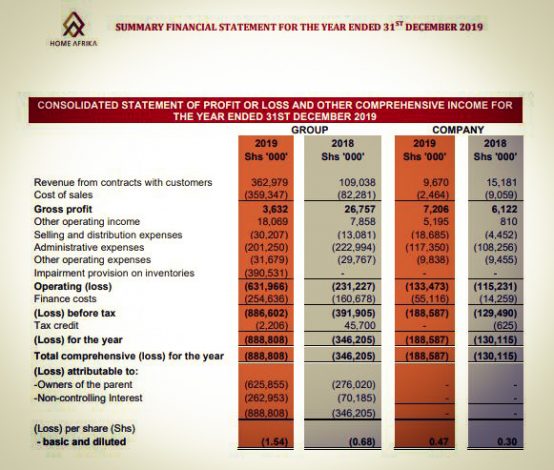 The company reported a 233 percent growth in gross revenue for the year ending 31st December 2019 compared to the same period in 2018 growing from Ksh 109 million to Ksh  363 million.

Some of the key projects the firm expects to realise revenue in the future include the Migaa Golf Estate, being a long-term project, is expected to realize its profitability towards the end of the project in 3 – 4 years’ time.

“To improve liquidity, the board has introduced new revenue streams including sale and agency arrangements for 3rd party properties and property management. Substantive cost reduction measures are also being enforced including reduction of salaries and other operating costs and even considering outsourcing options for certain functions of the organization to save on costs. The board is also in the process of identifying assets that can be disposed to raise cashflows.”

The directors do not recommend a dividend for the period ending 31st Dec 2019.