US has now confirmed more coronavirus cases than any other country (including China).

According to Johns Hopkins University, the latest figures in US have overtaken those recorded in China and Italy. 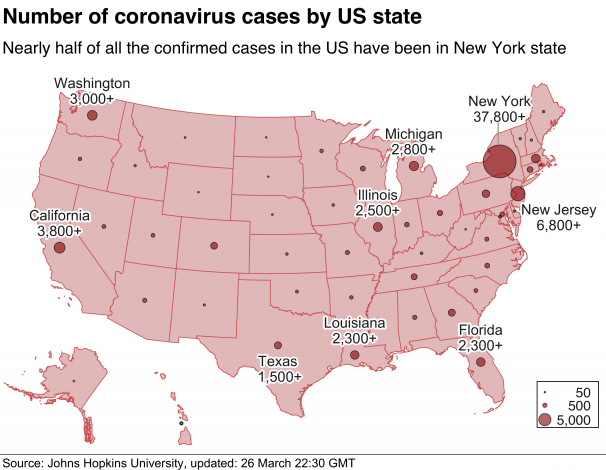 At a White House briefing on Thursday afternoon, President Trump responded to a question about the latest figures saying ‘it was a tribute to the amount of testing being done’.

Vice-President Mike Pence said that the virus tests were now available in all the states in the country. He further reported that more than 552,000 tests had been conducted in the entire nation.

President Trump set Easter Sunday 12 April as the day when the nation will reopen. The set date/goal has attracted much criticism.

At the briefing, Trump said:

US, like most countries around the world, have been severely hit by the global pandemic. An unprecedented 3.3 million Americans have been laid because of the virus.

A new research conducted by the Institute for Health Metrics and Evaluation at the University of Washington’s School of Medicine estimated that coronavirus related deaths in US could top 80,000 over the coming four months – even if people observe strict social distancing.

The report paints a grim picture as it further reveals that as many as 2,300 patients could be dying every day by April.