Mminele becomes Absa’s first black chief executive taking over from René van Wyk, who was serving on an interim basis following the exit of Maria Ramos in 2017.

“We are delighted to welcome Daniel to the Absa family. He brings with him a deep understanding of the financial services industry both in South Africa and abroad,” said Wendy Lucas-Bull, Chairman of the Absa Group Board. “His unique skills set and global perspective make him a suitable leader to drive our bank’s focus on long-term growth that is digitally-led across our markets.

Absa launched its strategy in March 2018, which focused on regaining market share in core businesses. We then reconfigured our operating model and made changes to our Executive Committee to set up the business for the implementation of the strategy.

“In terms of his starting point, Daniel will want to assess where we are in implementing that strategy and asses how he can play a role in strengthening the team’s ability to continue on that journey. As a leader, he will make his own assessment of what is required but he has a complete open mandate as the Group CE to lead this organisation,” said Lucas-Bull.

“I am delighted to be joining the Absa group. I look forward to being part of and leading the exciting journey that Absa has embarked upon to regain its rightful place in the South African market as well as to fully establish itself as an independent African financial services group with deep roots in South Africa,” said Mminele.

Van Wyk will step down as Chief Executive on 14 January 2020, but remain with the Group as an executive director for handover purposes until 31 January 2020.  He will rejoin Absa Group and Absa Bank’s boards as a non-executive director, following a six-month cooling-off period. 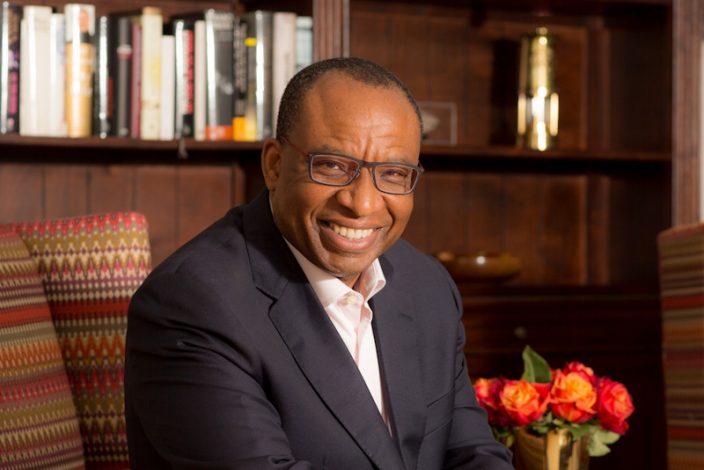 Aaron Daniel Mminele is the incoming CEO of Absa Group Limited, a Johannesburg-headquartered financial services company that has operations in 10 other African countries and representative offices in Namibia, Nigeria and London.  Absa is one of the big five banks in South Africa and is listed on the JSE.

Mminele spent two decades at the South African Reserve Bank (SARB), and was a deputy governor and a member of the Monetary Policy Committee at the time of his departure.

As deputy governor of the SARB, he was responsible for overseeing a number of departments such as financial markets, international economic relations and policy, National Payments System, financial surveillance as well as the human resources and operations cluster.

His key responsibilities – prior to becoming a deputy governor – was as head of the financial markets department and as executive general manager: Markets, which included responsibility for the foreign exchange desk, managing the forward book, reserves management, correspondent banking, financial markets research, and monetary policy implementation.

He had a membership in several SARB committees including the Prudential Committee, Risk Management, Financial Stability, and chairing the Reserve Management Committee and IT Investment Committee.

Before joining the SARB, Mminele worked as a banker for 12 years.

After completing a diploma in banking at Sparkasse Paderborn in Germany in 1987, he worked at Westdeutsche Landesbank Girozentrale for eight years split between the bank’s offices in Düsseldorf and London. His various roles included work as a loans officer in the international finance department, a corporate credit risk analyst before becoming an assistant manager for specialised finance focusing on project finance and public private partnerships by the time he left in 1995.

He came back to South Africa in 1995 and spent two years at Commerzbank Johannesburg as Customer Relations Manager for Corporate Banking and another two years at African Merchant Bank as deputy divisional head of special projects, responsible for infrastructure and project finance.

Born in Phalaborwa, Limpopo on 28 March 1965, Mminele is a father of two children and speaks three languages, Sepedi, English and German. In 2018, German president Frank-Walter Steinmeier awarded Mminele with the Great Order of Merit for his work in furthering German-South African relations.

In 2019, Mminele was the recipient of the Lifetime Achiever Award from the Association of Black Securities and Investment Professionals (ABSIP).

Kenya Monetary Policy Committee Meet on Jan 27; What to Expect