Public hearings on the state of mental health in Kenya will begin from January 13.

The taskforce on Mental Health appointed by the government has released its schedule for public hearings where it will receive memoranda from members of the public. Thereafter, assess Kenya’s mental health systems including the legal, policy and administrative environment.

“The taskforce will outline legal policy and administration reform proposals aimed at transforming mental health systems for improved quality of life,” reads the brief from the Ministry of Health headquarters.

According to the notice, the task force chaired by Dr. Frank Njenga will commence the hearing with sittings on January 13 in Meru.

The team will then move to Makueni, Eldoret, Nakuru on January 14, 15 and 16 respectively.

The Taskforce will complete its sittings in Nairobi on January 27. 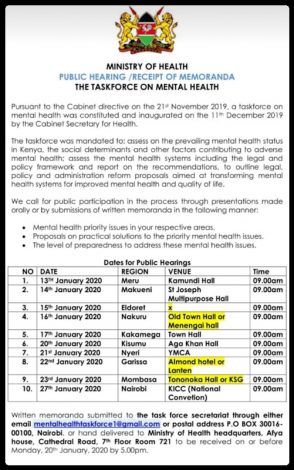 Those wishing to submit their handwritten memoranda to the taskforce must hand over their documents to the Ministry of Health headquarters at Afya House in Nairobi through postal address or by email to menatalhealthtaskforce1@gmail.com.

Coronavirus: 32 Patients Discharged in Kenya, Highest Recoveries in a Day