With a projected funding gap of 5.9 percent of gross domestic product this financial year, compared with 7.2 percent in the previous year, “Kenya should be a country of concern for investors at the moment,” said Charles Robertson, chief economist at Renaissance Capital during the 4th Annual East Africa Investor Conference held in Nairobi.

“With the budget deficit, we see a fiscal argument to retain the rate cap,” he said. “Any country with budget deficits as big as Kenya’s, current account deficit as big as Kenya’s and with a currency which most real effective exchange rate calculations by most banks say is overvalued, Kenya looks right for something to go wrong,” says Robertson. 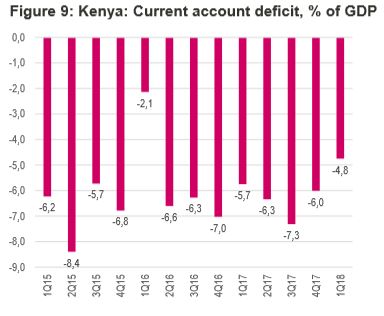 But, “It is not going to go wrong like Turkey.”
Similar sentiments have been shared with Ms.Stephanie Kimani and Faith Atiti, Analysts from CBA Group, “As efforts to rein in budget deficit intensifies, the resultant toll on living standards especially at a time when the private sector is not at its best should be rather obvious.

This could see the focus shift to monetary policy to keep the economic engine running at a decent pace.”

Renaissance Capital says the country’s fiscal consolidation – the policies are undertaken by Government to reduce their deficits and accumulation of debt stock – will hurt its economy. 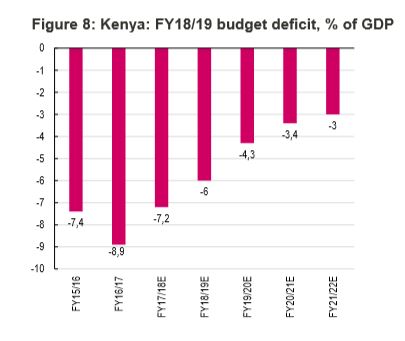 “We believe the government has not opted to cut spending – a la Ghana – because it plans to sustain capex spend through its Big 4 Agenda. We expect the budget to be positive for growth, not least because of a proposal to repeal the interest rate cap bill,” said Yvonne Mhango, Renaissance Capital, Sub-Saharan Economist.

Mhango notes that a country that undergoes fiscal consolidations, subdues growth depending on how aggressive the consolidation is.

“Reduced government spending could support a stable inflation outlook as aggregate demand weakens somewhat. Even then, we expect some caution especially due to developments in the external environment,” Analysts from CBA Group.

The proposed austerity measures are Ksh 37.6 billion reduction in spending equivalent to 1.5 percent cut to the estimated KSh 2.5 trillion 2018/19 fiscal budget. It technically shows that revenues are not going to keep pace with current expenditure.

“Issue is nearly if not more than half of our revenue will go in debt servicing,” says Nikhil Hira, Tax Consultant.
However, the bigger challenge for the monetary authority remains the current inefficiencies in the transmission of policy signals according to Analysts.

“Whereas the removal of the floor may somewhat help, limitation to pricing due to the cap on lending rates, currently at 13.0 percent, may still undermine the low of funds to the micro, small and medium enterprises,” Atiti and Kimani state.

Dennis Kabaara, Management Consultant in the Business Daily comments “We are in fiscal crisis because of a ‘big brother’ national government that is essentially unreformed from the pre-2010 constitution days.” He adds, “I am a great advocate of painless revenue collection, but let’s not talk about the ‘stealth taxes’ that will replace VAT on fuel.”

“I am very sympathetic to what the government is doing in Kenya. I think Kenya is trying to accelerate investment because it needs to get investment GDP from 17 percent to 25 percent. I think the government should be spending more on investment ideally, but this is not the year to be doing it.

A government that can get through tax increases, a government that is reluctant to cut spending as much as the markets might think was sensible, it is quite easy to see a negative scenario unfolding here and people are worried about excessive indebtedness.

Kenya should sail as close to the wind as it possibly can. Borrow as much as you can without tipping over the edge not a Turkey, Argentina style crisis because the quicker you can get investment up, get infrastructure up, electricity supply up, the quicker this country can industrialize and grow not at 4, 5, 6, 7,9 percent every year, double its economy every 10 years. That is what we want, but this is not the year to be trying.”

Kenya: 80,000 barrels per day not sufficient to construct a refinery

Why Analysts are Concerned with Kenya’ Rising Debt